Eagle Hills, a United Arab Emirates company went into joint venture with the government of Ethiopia to facelift Addis Ababa. The company on Monday launches construction of an ‘integrated community development’ project in Addis Ababa on 360,000 square meters of land.

The project, which is estimated to take up to seven years to be completed, is estimated to cost a total of 50 billion birr (around $1.8 billion). The first phase which will have shopping malls will be finalized three years.

“It is expected to energize the economy by creating around 25,000 jobs for Ethiopians. The development project also aims to preserve the historical and communal values of the area, while ensuring the current dwellers are also beneficiaries of the development project through ownership of some of the apartment units, challenging the previous practice of displacement,” according to Prime Minister Abiy Ahmed who launched the project last night.

He stated that Ethiopian government will have 27% share in the project which includes malls, 4,000 apartment houses, three star hotels commercial, retail and leisure facilities in a single, secure and exclusive setting surrounding a park.

It is indicated that some 1,600 households whose houses will be demolished will also be able to live I the apartments to be built.

“Eagle Hills has gave us 1.8 billion birr ($65 million) that will allow us to provide housing for those 1,600 households to get houses in the new project without being displaced from the area where they have been living for long,” Prime Minister Abiy said. 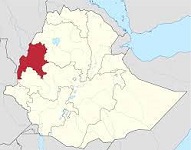