More than 440,000 smallholder farmers in Mali will soon have better access to rural financial services thanks to a new agreement signed on 6 July by the International Fund for Agricultural Development (IFAD) and the Republic of Mali.

The new agreement will provide financial support to the Inclusive Finance in Agricultural Value Chain Project (INCLUSIF), which will be implemented in five regions of the country (Koulikoro, Sikasso, Kayes, Ségou and Mopti). By providing a range of financial products, including savings, credit and micro-insurance, the project will enable smallholder farmers to invest in the necessary infrastructure and equipment that will help them produce, store, process and better market their products.

“INCLUSIF’s vision is to promote the sustainable transformation of agricultural value chains by improving financial inclusion for disadvantaged groups, such as women and young people, and their organizations,” said Philippe Rémy, IFAD Country Programme Manager for Mali.

Rémy said INCLUSIF will bring 440,000 smallholders and 360 agricultural professional organizations into the banking system. In addition, over 40,000 producers will have access to financing for climate change adaptation. The project will also develop profitable and sustainable relationships with the private sector and the financial system.

Currently, financial inclusion in Mali’s rural areas stands at 20 per cent. Small and medium-sized enterprises also experience difficulties in accessing finance. In 2016, less than 1 per cent of bank credit went to the agricultural sector.

The financial agreement was signed by Gilbert F. Houngbo, President of IFAD, and Boubou Cissé, Minister of Economy and Finance of the Republic of Mali. 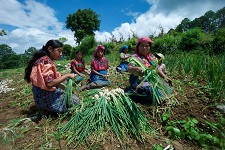