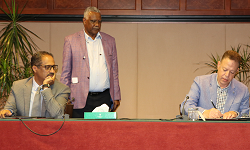 The partnership will enable Alkhorayef Industries to supply irrigation technologies worth 1.2 billion Ethiopian Birr (close to $32.5 million). MIDROC will be using the irrigations systems for its farms, which has been exporting vegetables and strawberries to Saudi Arabia, among others.

Briefing journalists in Addis Ababa, Ethiopia, this afternoon the CEO of MIDROC investment group Mr. Jemal Ahmed stated that the agreement is crucial to increase our productivity while reducing costs. “It will enable us to produce three times a year by making us independent from rain,” Jamal said. He indicated that the company will use the center pivot irrigation technology for its 13,000 hectares of land farm. One center pivot irrigation technology can enable to water up to 80 hectares of land.

In Ethiopia most of the people engaged in agriculture are smallholder farmers, who are using centuries old traditional farming techniques.
Meanwhile in recent years some mechanized farms especially those which produce export commodities such as, vegetables have been emerging.

The Government of Prime Minister Abiy Ahmed has also been engaged in modernizing farming practices of smallholder farmers by engaging them in clustered (grouped) farming providing various machineries such as, tractors and combines, among others. In the last two years, agriculture machineries leasing companies have also began operation for the first time.