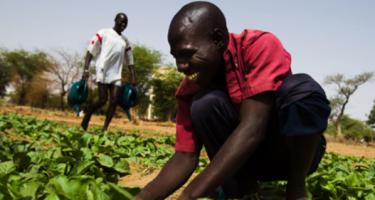 Concluding a five-day visit to Kenya the Vice President of the International Fund for Agricultural Development (IFAD), Cornelia Richter stresses the need for innovations for rural transformation in Africa.

During her visit she met with Deputy President William Ruto and other high-ranking government officials and discussed the expanding successful rural development investments and the need to include stronger links between public and private sector.

“With more than 75 per cent of Kenya’s population living in rural areas, IFAD is strongly committed to investing in the rural women and men who are so important to ensuring food security in these communities,” Richter said prior to her visit to the country.

Agriculture plays a key role in Kenya’s economy, accounting for about 26 per cent of GDP and more than 40 per cent of employment. However, poverty and food insecurity continue to rise due to high population growth and the increasing depletion of natural resources.

IFAD, the Government of Kenya and various development partners are working together to reduce poverty and food insecurity through various interventions, including financial services to smallholder farmers and support for various value chains.

Their discussions focused on the partnership of IFAD and Kenya, the role of smallholder farmers in ensuring food security in the country, the challenge of climate change, and the employment and entrepreneurial opportunities agriculture can offer to young rural people.

An encouraging insight, Richter said, was meeting families in Nakuru County who are investing in dairy cows through a grant scheme as a part of the Smallholder Dairy Commercialization Project. The project has reached more than 120,000 rural people, of which 60 per cent are women. IFAD’s impact assessment shows that due to the promotion of good quality feed, and training for animal care and breeding, farmers supported by the project had 37 per cent greater total milk production and obtained a 31 per cent higher selling price.

Richter also visited students and “future environmentalists” of Saint Ursula Primary School in the Embu district – 130 km northeast of Nairobi – where recent droughts are not only hurting farmers but the area’s forests too. Students are encouraged to take up “greening projects” such as how to plant, prune and care for trees.

The school also has installed a biogas system from which it uses the gas for cooking. The school is one of 1,706 schools across Kenya, that are part of the IFAD-supported Upper Tana Catchment Natural Resource Management Project.

Since 1979, IFAD has financed 18 programmes and projects in Kenya for a total value of US$819.3 million, of which IFAD has contributed $376.3 million, directly benefiting more than 4.3 million Kenyan rural households. During her visit, Richter visited three of the four IFAD-supported projects ongoing in Kenya. She travelled to Embu and Nakuru counties in the East Region to the IFAD-supported Small Dairy Commercialization Project and the Kenya Cereal Enhancement Programme–Climate Resilience Adaptation Livelihoods Window. The Vice-President met directly with project participants, including rural women and young people, to learn first-hand how the projects’ investments have improved their lives.