Agriculture ministers of from locus outbreak affected eastern African countries Ethiopia, Kenya and Somalia are set to meet in Addis Ababa this week on the sidelines of the African Union heads of states summit.

Reports show that the worst desert locust outbreak in decades is ravaging tens of thousands of hectares of crop and pasture lands in the three east African countries. The locusts present an extremely alarming and unprecedented threat to food security and livelihoods in the region, according to the Food and Agriculture Organization of the United Nations (FAO), which has been working closely with the affected countries in Africa as well as Saudi Arabia, Sudan and Yemen to contain the invasion of the locust.

“If not controlled, the current situation will be further exacerbated by new locust infestations in the three countries; and with a great possibility of spreading further to Eritrea, South Sudan and Uganda. In order to mitigate the challenge, is thus far, FAO has mobilized $15.4 million of the $76 million required for the rapid response and control operations and on livelihoods recovery support,” FAO said in its statement.

FAO will hold a briefing and consultative meeting on the desert locust response in Eastern Africa to advocate support to scale up interventions for the effective containment of the invasion. Following this meeting, Ministers from the Eastern Africa countries and FAO Leadership are set to hold a press conference to brief the media and take questions on current and future strategies to combat the desert locust in the region. 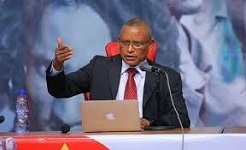 Coronavirus cases in Ethiopia increase to 429