The desert locust, which has been damaging crops in some east African countries, is now moving from Somali to Ethiopia to hit the country once gain.

“Currently hopper bands and a new generation of immature swarms are forming in the Oromia and Southern Nations, Nationalities, and Peoples’ (SNNP) regions, including the Rift Valley – the nation’s breadbasket. Desert locusts are currently active in 161 woredas (districts), down from 172 in February 2020,” stated desert locust situation report of FAO for the month of April 2020.

“Despite control efforts, cross-border movements of immature swarms along the borders of Kenya and Somalia are ongoing. Swarms that formed in Somalia are now moving into Ethiopia through Aysha,” it said indicating that the country needs $50 million to contain the situation.

FAO revised its desert locust crisis appeal to $153 million for 10 countries (Djibouti, Eritrea, Ethiopia, Kenya, Somalia, South Sudan, the Sudan, Uganda, the United Republic of Tanzania and Yemen), of which USD 65.5 million is for Ethiopia.

FAO expressed its worries that if Ethiopia fails to stop the spread of the swarm, it is likely to exacerbate the food insecurity of the country, whose over 8.5 million people are already food insecure and depend on humanitarian food assistance.

“The timing of funding is critical for both pillars of the appeal (control and livelihoods). Any delay in scaling up field operations will likely lead to a further expansion of desert locust and a marked deterioration of food security,” the situation report said.

It is recalled that the Ministry of Agriculture of Ethiopia along its partners has been undertaking different measures to stop the spread of locust warm in Ethiopia including ddeploying four planes to spray pesticides, among others. 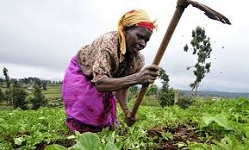