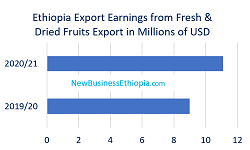 BY ANDUALEM SISAY GESSESSE – The land and weather of Ethiopia is favorable for most of the popular fruits ranging from apple, avocado, strawberry, orange, pineapple, banana, lemon, papaya, mango, watermelon, among others. from Tigray, Benishangul Gumz, to Amhara, Oromia, and Dire Dawa, all the regions of Ethiopia are suitable for growing different fruits.

Like other crops and vegetables, most of these fruits are grown by smallholder farmers. Meanwhile in recent years especially after the country opened its door for flower growers, some international companies have been engaged in production of fruits such as, strawberry targeting mainly export market.

Dozens of companies have also been engaged in collecting these fruits and exporting to neighboring countries.

Production
Total fruits production of Ethiopia which was around 410,000 metric tones in 2005 has almost doubled in 2018 reaching 800,000 metric tons in 2018, according to data of the Central Statistics Agency (CSA).

However, most of the produce are consumed by the growers, while only less than 50,000 metric tons was sold, according to the August 2021 paper by Fantu Bachewe and Bart Minten from International Food Policy Research Institute (IFPRI).

Export
During the first six months of the current budget years of Ethiopia started July 8, 2021, Ethiopia has earned about $9 million from export of fresh and dried fruits.

The fact that the average FOB value of Ethiopia’s fruit is less than half a U.S. dollar, suggests that like most of Ethiopia’s export items fruit export is also a victim of under invoicing practices.

From year 2019/20 earnings of Ethiopia from fresh and dried fruits export has increased by around $2 million. 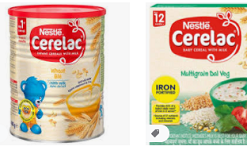