One of Trans Nation Airways choppers crashed this morning minutes after departure from the Bole International Airport in Addis Ababa, Ethiopia.

All the two crew and five passengers of the chopper heading to Jimma are reportedly survived the accident. The chopper crashed around Bole Bulbula area in Addis Ababa, according to FBC, the ruling party owned media report, which quoted head of aviation contol agency.  Trans Nation Airways is owned by the Ethiopian born Saudi billionaire Sheikh Mohammed Hussein Ali Al-Amoudi of MIDROC (Mohammed International Development Research and Organization Companies) Technology Group of Ethiopia.


Trans Nation Airways company profile states that it has been providing passenger and cargo air Transportation services using its two Bombardier Dash-8-200Q Aircrafts. It is not yet clear what caused the accident and who were aboard.

The Dash-8-200s are operated for domestic and international charter services. The aircraft is also leased out to other operators such as International Organizations, NGOs, Tour Operators, UN Agencies, and others mainly on wet lease basis.

It is recalled that last year in August 2018 one military chopper coming from Eastern part of Ethiopia has crashed around Bishoftu leading to death of 18 people. In addition, the whole world mourn recently when Boeing 737 Max 8 has crashed six minutes after departing from Bole International Airport killing all its 157 passengers and crew. 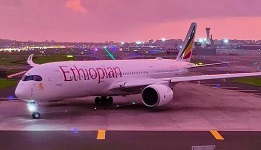