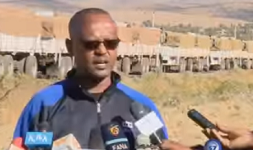 The Government of Ethiopia along with its humanitarian partners has distributed humanitarian relief items to the people in Tigray region in the northern part of the country who are affected by the fighting between the federal government troops and TPLF militia.

“By mid-November 2020, an initial round of humanitarian relief items, including medical items, were sent to Dansha, Welkait, Kafta/Humera and Debarq areas. On December 8, 2020, 44 trucks carrying 18,200 quintals of food aid dispatched by the Federal Government reached the town of Shire for distribution to other parts of the region. The dispatch also includes 4 trucks carrying 5,500 quintals of food to Alamat,” said the Office of the rime Minister in its press statement.

“Similarly, 30 trucks carrying 12,500 quintals of food supplies have reached Mekelle, with an additional 7000 quintals of wheat flour dispatched to Mekelle. 3 three trucks of medical supplies have almost reached the city of Mekelle and will be distributed by tomorrow. 7 trucks of medical supplies to Shire and Adigrat towns have also been dispatched. It is to be recalled that on November 29, 2020, the Federal Government signed an agreement with the United Nations that outlines collaboration for the delivery of humanitarian assistance,” it said.

The Agreement for an Enhanced Coordination Mechanism for Humanitarian Access in Ethiopia’s Tigray Region, sets out the coordination mechanism’s specific objectives and scope, its guiding principles, central commitments and coordination arrangements and its major stakeholders and their respective roles, responsibilities and accountabilities, according to the statement from the PM Office dispatched to the media this morning.

“The agreement signed with the United Nations recognizes that the Government of Ethiopia at federal and regional levels has “primary responsibility for meeting assessed and potential humanitarian needs in the country” and that the delivery of assistance lies within a coordination framework under the Federal government’s overall authority. It also recognizes that “given the likelihood that UN and other humanitarian organizations will be delivering assistance in insecure environment, the Government of Ethiopia will be responsible for ensuring the safety and security of staff of UN agencies and humanitarian partners.”

“Suggestions that humanitarian assistance is impeded due to active military combat, in several cities and surrounding areas within the Tigray region, is untrue and undermines the critical work undertaken by the National Defence Forces to stabilize the region from the attacks waged by the belligerent clique. Sporadic gunfire exchanged with the retreating remnants of the militia and efforts to apprehend the criminal clique on the flee, need not be misconstrued as active conflict. However, as the Federal government is responsible for ensuring that humanitarian support and actors are protected while operating in an insecure environment, access will be coordinated in consultation with the Federal government as stipulated in the agreement,” the statement noted.

“The Federal government takes its responsibility to citizen safety and well-being seriously and is committed to ensuring that vulnerable communities in Tigray region are provided the necessary humanitarian assistance. Reports to the contrary are results of a misinformation campaign by those that are bent on undermining the Federal government,” it said.

The statement also stated recalled that at the beginning of the rule of law operations in the Tigray region, in response to the criminal clique’s belligerent attacks on the Northern Command of the Ethiopian National Defence Forces, the Federal government formed a high-level committee to oversee humanitarian assistance in the region, led by the Ministry of Peace. It said that this committee has been set up to coordinate all national and partner efforts in the mobilization and delivery of humanitarian assistance to vulnerable communities directly affected by measures to bring the belligerent clique to justice.

“Following field technical assessments made by the committee, initial dispatch of food and non-food items were made to areas within the Tigray region that were under Federal command. In the areas where the criminal clique’s militia were still active, considering the security threats that were prevalent at the time, delivery was delayed to ensure that humanitarian assistance reached the intended recipients. However, this situation has changed since Mekelle came under Federal command, concluding the active military intervention to apprehend the criminal clique,” the statement noted. 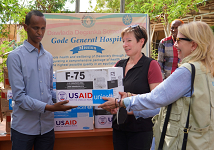 How Ethiopia can repatriate stolen billions of dollars