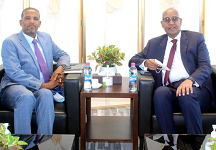 “During the meeting, an agreement has been reached to further cooperate in setting up a mechanism that will ensure the timely transportation of Ethiopia’s cargoes from the ports of Djibouti with the view to reduce cargo dwelling time at the ports, which will have a significant positive impact in terms of lowering service costs,” according to the information from the Ministry of Foreign Affairs.

During the meeting held today at the Djibouti International Free Trade Zone, they also discuss issues of bilateral importance, in addition to how to improve the efficient and effective movement of Ethiopia’s cargoes from Djibouti Ports and Free Zones to various parts of Ethiopia.

“Following a fruitful discussion on a numerous issue, both have underscored the necessity of speeding up the ongoing construction of the Galamo-Molud asphalt road, which is located in one of the busiest corridors connecting Ethiopia to the ports of Djibouti and currently hosting the lion share of Ethiopia’s seaborne cargo,” the statement said.

It is indicated that up on completion, the road is sought to ultimately augment the smooth flow of cargoes across the Ethio-Djibouti corridor. 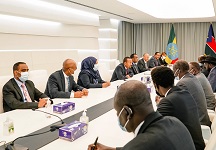