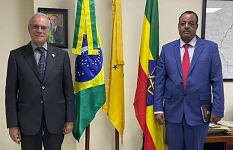 Ambassador Extraordinary and Plenipotentiary of Ethiopia to Brazil Ambassador Tafa Tulu Dadi paid a courtesy call on the Ambassdor of Brazil in Ethiopia on Friday, Ambassador Luiz Eduardo in Addis Ababa.

During their meeting, Ambassador Tafa noted and appreciated the diplomatic relationships between Ethiopia and Brazil that lasted for more than seven decades, according to the information from the Ministry of Foreign Affairs of Ethiopia. “Ambassador Tafa also expressed delight over the government of Brazil’s decision to award the prestigious Order of Rio Branco to Ethiopian Airlines for the outstanding service the Airlines had rendered to Brazil during the high-time of the Coronavirus Pandemic.”

Since the award is bestowed to people who provide meritorious service to Brazil, Ambassador Tafa said the decision of the government of Brazil demonstrated the existence of mutually beneficial relationships between the two countries which should further be strengthened with various engagements.

Ambassador Luiz Eduardo on his part, noted that the similarities between the two countries, including the ecosystem, development goals and trajectories and foreign policy objectives, have furnished fertile grounds for cooperation.

In light of these shared values and potential for growth, the two countries have signed more than 12 Technical Cooperation agreements and MoUs, the Brazilian Ambassador said.

He also expressed Brazil’s keen interest to cementing ties with Ethiopia through sharing its rich experience in the agricultural sector.

The meeting between the two sides ended up with pledges to scale up cooperation in matters of shared issues further ensuring the strategic partnership between the two countries.

In line with the institutional reforms of the Ministry of Foreign Affairs of Ethiopia, Ethiopia’s Ambassador to Brazil is representing his country residing in Ethiopia.