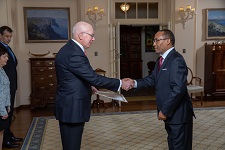 H.E Ambassador Dr. Muktar Kedir presented his letter of credence to H.E General the Honourable David Hurley, Governor-General of the Commonwealth of Australia in a ceremony held at the Government House, in Canberra, on the 23rd of June 2021.

At the ceremony, Ambassador Muktar conveyed the warm greetings and best wishes of President Sahile-Work Zewde to the Governor-General, the Government and the People of the Commonwealth of Australia.

During the occasion, the Ambassador and the Governor-General had a private discussion where the two sides exchanged views on ways of further enhancing the bilateral relations between Ethiopia and Australia.
H.E Ambassador Muktar noted that bilateral ties between Ethiopia and Australia had expanded across multiple sectors since the establishment of diplomatic relations in the mid-1960s.
The Ambassador has also underscored the need to enhance the cooperation in the areas of investment, trade, mining, education and agriculture.
He further commended the growing interest of Australian companies to invest in Ethiopia in the mining and renewable energy sectors.
The Ambassador also noted that the growing Ethiopian Diaspora in Australia will serve as a bridge to foster bilateral relations.
The Ambassador has also briefed the Governor-General about the successful accomplishment of the 6th National Election which was conducted a day before the ceremony.
The Governor-General, on his part, noted that he is looking forward to further strengthen the existing relationship between the two countries and assured the Ambassador the full support of the Government of the Common Wealth of Australia for his efforts to scale up the bilateral relations.
(Ministry of Foreign Affairs of Ethiopia)