BY HAWA AHMED AMBAW – Tea is one of the commercial products of Ethiopia. It mainly grows in the Western part of the country. Located at about 780 kilometers West of Addis Ababa, Gumaro and Wush Wush are the two biggest tea plantations in Ethiopia. Located 637 kilometres South West of Addis Ababa, Gumaro is the oldest tea farm in the country. It started operation at small scale in the early 1920s during the time of Empress Zewditu, the first female head of an internationally recognized country in African continent in the 19th and 20th centuries.

Tea seeds were introduced to Gumaro in 1928 through Gore town, which is adjacent to the Tea Plantation. It is believed that the British Council General in Gore (operational during the time) obtained seeds from India and distributed them to local farmers. Then in 1957, a Lebanese expatriate living in Gumaro, in cooperation with a Belgian, expanded his tea estate to 25 hectares.

In 1981 the Government started an expansion plan and developed it to its present size of 860 hectares. In addition, Gumaro has 761 hectares of eucalyptus trees were planted to serve as fuel for tea drying in the factories. Gumaro is privatized / sold to the Ethiopian born Saudi Billionaire, Sheikh Al Amoudi company Ethio Agriceft. Ethio Agriceft bought the farm after the current government, which came to power through arm struggle in 1991.

Ethio Agriceft has also bought the other largest tea plantation in the country – Wush Wush. Wush Wush Plantation started as a trial in 1973. Then tea development expansion continued by the government in 1981 till it reached its present size of 1249 hectares. In addition, 977 ha of eucalyptus trees were planted to serve as fuel for tea drying in the factories.

Ethio Agriceft in its factory located in Addis Ababa do the final sorting, blending, grading, cup tasting and packing the tea. The total annual production of the two plantations ranges between 5700 tons to 7000 tons. Currently the company is packing three brands of black tea black tea (Gumaro, Wush Wush and Addis) in 100 and 50 grams packs. Addis Tea is also available in immersible tea bags of 2 grams each and 25 bags in a sachet.

Some of the products of Agriceft include, green label, red label, gold label, with tastes of herb, ginger, mint, cinnamon and green tea. The other major tea brand in Ethiopia ‘Good Morning / Ahadu’, which is packed by East Africa Holding, the company owned by Bizuayehu Bizenu, an Ethiopian multimillionaire industrialist owning about a dozen companies ranging from manufacturing of cement, cosmetics and beverages to trading businesses.

Tea production VS potential
The tea industry at the moment has created jobs for several thousands of people mainly in the farms. Though tea is not a major export item for Ethiopia. Tea export generates a few millions of dollars per year to the country.

Meanwhile the production of these farms have been playing key role in substituting imported tea over the past years, especially the one coming from the neighboring Kenya, one of the finest African tea producer and among the top tea producing countries in the world.

Reports show that Ethiopia has 6 million hectares of land suitable for tea production. Western Ethiopia mainly Gambella, Jimma, Kaffa, Wellega, Illubabor and some parts of Amhara region are the major areas of Ethiopia with the potential of growing tea at commercial level.

The government has stated in its ambitious Growth and Transformation Plan that it aimed to increase tea farm size in Ethiopia to 1.4 million hectares of land by 2020 and generate $1.5 billion from tea export – over half the amount of foreign currency Ethiopia is earning per year at the moment from all its export commodities.

Meanwhile still with its huge tea production potentials, Ethiopia only earns less than five million dollars from coffee export. The question now is will the country come up with a new approach to utilize the huge opportunity for boosting tea production, perhaps involving farmers cooperatives like that of Kenya, which produces over 20 percent of the world’s tea. 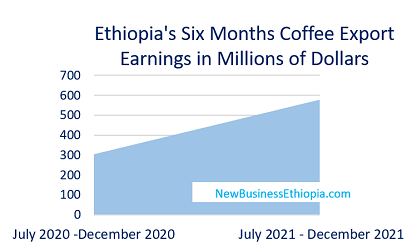