By Andualem Sisay Gessesse – As a journalist for more than a decade, I have witnessed how millions of people in the rural area are combating with severe poverty. From North to South, East to West and central part of the country, millions are still using centuries old traditional, less productive and labor-intensive form of farming technique. On their small plot of land, millions of farmers in Ethiopia can’t produce more than what their family members consume.

On the other hand, several million of farmers can’t even produce enough for their family. They are dependent on food aid under the popular productive safety net.

The agricultural growth the government has been boasting about, did not match the population growth and spared our officials from stretching their hands to the developed world for food aid.

No one seems to care or be serious to give a lasting answer for the question, why in the world has Ethiopians failed to feed themselves at least like their African neighbors?

If you ask me it is not because our farmers are lazy or not hardworking? It is just because we, the so called elite, hate farming or agriculture or have wrong perception towards agriculture.  Of course this has its own background and history. Because of the frequent drought and the hardship of rural life and farming that results in less productivity and hand-mouth routine life, we all prefer to go to school to work in offices in urban areas.

After all our urban life dream is not much different from the lifestyles of some of the fake investors we have been inviting and partnering with for the past two decades. It is all about making money by any means. Then own a villa, fancy car and spend the night drinking expensive liquors often mingling with prostitutes of Addis Ababa or Bangkok, etc….

So these were some of our policy makers, who claim to change the lives of our farmers from whom they ran away long ago. But if we care about agriculture and at least google about it, we can learn that return on investment in agriculture is among the highest and can transform a society in a short period of time than any other business.

Here is the recent good news I heard, which inspired me to write this article. Cooperatives owned by farmers in Oromia Region around Assela, the area well known for barley production, have bought Assela Malt Factory for 1.3 billion birr (around $47 million) from the government privatization agency. After the latest expansion, the factor is projected to make annual profit of over 230 million birr (Around $8.3 million).

I have been listening about Oromia economic revolution before but I never thought it is different from the old rhetoric of the ruling coalition such as the double digit growth, GTP, bla bla…

But most of all the investment decision made by these farmers is millstone to transform the individual lives of each farmer from hand-to-mouth life style to becoming an investor.

Such bold decision, which I am sure supported and spearheaded by the Team Lemma, makes agribusiness sexy for other people. I am sure by completing the full circle of barley value chain; these farmers can own a brewery that after few years.

You know what I like most about such ownership businesses by our farmers? The profits coming from Ethiopian farmers owned businesses will be reinvested in Ethiopia creating more jobs and will not be invested in real estates in Dubai like our fake investors from urban area.  This is also one of the methods to stop illicit financial outflows from Ethiopia.

That is how these farmers can create sustainable and decent jobs for their children. We cannot assure sustainable jobs for our daughters by sending them to the so-called industrial parks, which pays less than a dollar that can’t even buy menstruation pads for them or oil for their hair.

If we care about our poor farmers, policy makers or government can help them make the right decision, help them access finance and loans which the government has been providing to fake foreign and local investors.

What am I saying?

I am saying keep up the good work Team Lemma! I heard that the Cheffee Oromia on Monday has decided to give special attention to agriculture and economic empowerment at grassroots level.

To other regional administrations: if you care about your poor farmers and pastoralists you should also replicate what Oromia farmers in Assela area have done.  If the government organized barley farmers to come together as cooperatives and union and our banks / financial institutions, etc provide loans to them and helped them own a malt factory then:

Let the other investors local or foreign, who have enough capital and knowledge do something bigger, which these farmers can’t do. We have seen enough the so called ‘investors’ who buy a product from our poor farmers for 10 birr and sell it for 100 birr? THAT IS ENOUGH!

Do the farmers and pastoralists need to have technical skills to own these factories? No! Their children / professionals, who went to school escaping rural poverty, can run the factories, logistics and export and import.

They can bring in experts for few months if they need the latest technologies. That is not a big deal in this era of youtube video tutorial where anybody can do anything as long as she/he is committed to study and do the job.

So, all you policy makers need to know is that, Ethiopia is a rich nation with millions of poor people. If you care for the people and committed to change their lives, just help the poor to utilize properly the available resources around them!

When you start caring you get closer to the farmers at the grassroots level, the farmers or the pastoralists are willing to change their lives for good, like barley farmers in Assela. 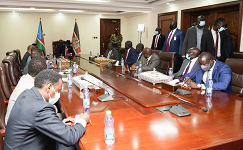 69 recover in Ethiopia from coronavirus – UPDATED