By Andualem Sisay Gessesse – Ethiopia has pursued the developmental state model for over 15 years. For so long, the government seemed content with the model believing it brought the country to the club of the fastest growing economies in the world. Rosy government reports on economic growth have lately been corroborated by international institutions despite slight variations in figures of the growth rate.

Ethiopia has built on its strong track record of development over more than a decade, according to the IMF. “Growth slowed in 2017/18, but remained high while the current account deficit continued to narrow,” the IMF said in a December 2018 report on the health of Ethiopia’s economy.

The ills of Ethiopia’s economy, however, have been exposed recently as it suffered from severe foreign currency shortage and a huge trade deficit. These economic challenges coupled with a nationwide political crisis resulted in anti-government protests, which forced the ruling coalition to examine its internal and external challenges.

In the middle of the crisis, the ruling Ethiopian People’s Revolutionary Democratic Front (EPRDF) announced their plan to partially privatize and allow broader private sector roles. While, in certain sectors of the economy such as telecom, aviation, electricity as well as maritime and logistics services, among others, the state is likely to remain dominant in the short run, public private partnership (PPP) model will help the government guide the private sector.

Not long after this announcement, the unrest – mainly fuelled by marginalization of the majority from the economy – forced the leader of EPRDF and the country, Prime Minister Hailemariam Desalegn, to resign from both positions.

This led to the appointment of the 42-year old reformist Abiy Ahmed (PhD) as EPRDF’s Chairperson and the country’s Prime Minister a little over a year ago.

Embracing the privatization agenda already agreed upon by his party, Abiy immediately embarked on a wide range of political and economic reform. This includes introducing new trade and investment laws that allow foreigners to invest in previously restricted finance and other sectors.

A new investment law, currently in its draft stage, is also expected to allow liberalization of many sectors including the media, while improving the business climate in Ethiopia.

Such policy reforms and privatization-cum-liberalization moves of Prime Minister Abiy raise several questions about the future of Ethiopia’s developmental state that has been central to the rapid growth rates of the last decade.

The Ethiopian Developmental State was inspired by and rooted in the East Asian Tigers, but with some tailorings to fit Ethiopia’s realities in addition to factoring the experiences of other recent economic success cases like China, according to its chief architect, Meles Zenawi, who once famously joked that Ethiopia did it like Frank Sinatra … “I did it my way”.

Many perceive developmental state to be a model that hangs on the predominant role of the state in the economy with tendency to investing in areas the private sector may neglect such as infrastructure development.

While there is no universal definition, the developmental state is not actually about what sectors are being invested in, but also about the delivery mode of the state bureaucracy. Scholars like Doner et. al (2005), define developmental states as “organisational complexes in which expert and coherent bureaucratic agencies collaborate with organised private sectors to spur national economic transformation”.

Hence, the developmental state theoretically is not about the state taking over, but about it guiding the private sector strategically.

In Ethiopia there is an over-reliance on state owned enterprises and foreign firms as actors in the market, as scholars Ha-Joon Chang and Jostein Hauge argued in their publication – The Concept of a ‘Developmental State’ in Ethiopia featured in The Oxford Handbook of the Ethiopian Economy.

“The East Asian developmental state model endorses state ownership in the economy but also emphasizes the importance of an internationally competitive domestic private sector. A domestic private sector is virtually non-existent in Ethiopia at this point, at least in manufacturing industry, particularly that which is export oriented. This needs to change if economic growth is to be sustained and translate into economic development,” they duo explained.

On June 11, 2019, Addis Ababa hosted a day long international conference that reflected on developmental state in Ethiopia. It was organized by the Center for International Private Enterprises (CIPE) in collaboration with the home grown Forum for Social Study (FSS).

Among the participants were renowned global opinion leaders such as Professor Francis Fukuyama from Stanford University and scholars who have been following the economic and political developments in Ethiopia.

In his lecture at this conference, Professor Fukuyama indicated that developmental state might have not worked everywhere properly. “… while it worked well in certain countries like South Korea or Japan, it did not work so well in Pakistan, Argentina or many other places, where the government wants the infant grown up to a viable adult, it could compete globally; but the government did not take away the subsidies. They did not allow the child become an adult, and therefore created non-competitive protected industries for essentially political reasons,” he explained.

The Ethiopian development model differs from the East Asian developmental state model because public support for the state’s development project is somewhat fragile and fragmented, and the Ethiopian bureaucracy does not have much power or independence from the ruling party, according to Ha-Joon Chang and Jostein Hauge.

Appreciating the ongoing fast track reforms, Yeraswork Admassie (PhD), Executive Director of Forum for Social Studies, expressed his concerns about the uncertainties in Ethiopia in the face of political turmoil. “There is so much uncertainty in terms of where the country is heading,” he said, in his opening speech at the June 11 day-long conference themed “Democracy and the future of Ethiopia’s developmental state”

Reform challenges
Though many welcomed his swift moves with remarkable achievements in both political and economic fronts, critics warn that Abiy should be cautious about the way forward.

Complete liberalization of the economy and diminishing the intervention of the state at this stage may not sustain the economic growth Ethiopia obtained through developmental state policy for over a decade. Some critics of liberalisation suggest that leaving tens of millions of unemployed youth and poor farmers at the mercy of free market, may worsen the current political crisis and widen the inequality.

They suggest that the government needs to be strategic in liberalizing the economy and privatizing some profitable companies such as, Ethiopian Airlines and ethio telecom.

For example, Kebour Ghenna, Director of Pan African Chamber of Commerce, argued in a recent article titled “Deconstructing the privatization scam – A very British disease” that privatization of ethio telecom might lead to the loss of thousands of jobs as it happened in Kenya telecom privatization. Improving the management bottlenecks and making it a globally competent company like Ethiopian Airlines is possible instead of privatizing it, according to the article published on New Business Ethiopia.

The case for Developmental State
The mastermind of Ethiopia’s developmental state, the late Prime Minister Meles Zenawi, argued that only concerted and persistent political action can overcome the poverty traps in developing countries including Ethiopia.

“We have shown that development requires the accumulation of social capital, which cannot be adequately supplied by the market. We have briefly shown that the nightwatchman state of the neoliberal paradigm is inadequate to overcoming such bottlenecks and accelerating development,” Meles stated in his paper titled, “States and Markets: Neoliberal Limitations and the Case for a Developmental State”.

Meles concludes that the theory of the developmental state completes the alternative paradigm by showing what type of state can intervene in the economy to accelerate growth while at the same time limiting socially wasteful rent-seeking activities.

But his critics argue there are no fertile ground for developmental state model in Ethiopia. “…the system of ethnic federalism and the perception of policies disproportionately marginalizing the Oromo and Amhara people means that the development model, as it is structured now, is somewhat fragile,” argue the non-Ethiopian scholars duo in the Oxford Handbook of Ethiopian Economy – The Concept of a ‘Developmental State’ in Ethiopia.

Some argued that even though Ethiopia’s constitution gives autonomy for regional states, it has not been properly exercised by the regions as a result of central government’s top-down policy and practical approach, which marginalized the regions from tailor-made policy development.

As a result of such a one size-fits-all approach of the federal government, some regions of Ethiopia – mainly in the peripherals – have not been growing, according to Dereje Feyissa (PhD), a Senior Research Advisor at Life and Peace Institute. He was one of the panelists at the June 11 conference.

According to him, instead of trying to build sugar factories in Afar Region, for instance, something related to camel, which the community is familiar with could have been more relevant to the society and the development of the area.

A participant at the conference on the fate of Ethiopia’s Developmental State – an ardent supporter of Meles’ economic model but who requested to remain anonymous – has described the liberalization agenda promoted by Abiy as old-fashioned. According to her, the world at the moment is looking for a solution that fixes the crisis created as a result of neoliberalism.

Meanwhile, macroeconomists like Professor Alemayehu Gedda argue that though Ethiopia has managed to register 7 to 8 percent economic growth per year for the past decade, the economy in general and the growth obtained as a result of developmental state in particular, have been achieved at the expense of accumulated multiple social, economic and political challenges.

As a result, Ethiopia’s growth has been characterized as non-inclusive and highly inflationary, with chronic trade imbalance and widening inequality while the country keeps struggling with continuous and severe forex shortage.

Professor Alemayehu also argues that poor state capacity and lack of professionalism coupled with the ethnic federalism have worsened the depth of poverty from 30 to 70 percent. Significant accumulation of debt, 60 percent of GDP, small industry share to GDP, while investments in Ethiopia were not backed by food sector growth, make things all gloomier.

Prof. Alemayehu, who is also skeptical of the relevance of neoliberalism for Ethiopia at this stage, associated most of the above challenges Ethiopia is currently facing with the undemocratic nature of the government.

“Democratic developmental state should be the way ahead for Ethiopia,” he suggested.
In the face of the current political, economic and social crisis with millions of unemployed youth, perhaps what Ethiopia needs is to consider the existing models and formulate its own model that takes the country’s cultural and social context in to consideration.

“The current political and economic reforms in Ethiopia open new opportunities for the private sector to contribute more than ever to the economic growth. These reforms can only be successful if we can create more economic opportunities and more jobs for the large number of young people across the country,” advises Hailemelekot Asfaw, the Director of CIPE’s East Africa Regional Office. 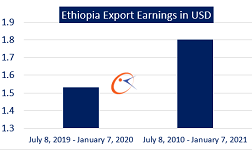