Two Chinese companies have concluded a deal with Ethiopian government to invest a total of $2 billion to process Ethiopia’s bamboo and produce paper products for both local and export market.

Tyson Group and Green Diamond will be engaged in processing of bamboo in Benishangul Gumz Region of Ethiopia and produce paper products, according to Abebe Abebayehu, Investment Commissioner of Ethiopia who, concluded the deal in China last week, accompanying Prime Minister Abiy Ahmed of Ethiopia to attend the One Belt and Road conference of the second biggest economy of the world.

Including the $1.8 billion State Grid Corporation, which among others will be engaged in supplying electricity to 16 industry parks in Ethiopia, five Chinese companies and Ethiopian Investment Commission have signed a total of $4 billion Chinese foreign direct investment last week at the sidelines of One Belt and Road conference in Beijing.

When the investment of Tyson Group and Green Diamond will be fully implemented it is going to will create huge job opportunities for the people in Benishangul Gumz which has huge areas covered with bamboo, according to Mr. Abebe. He stated that the investment.

Speaking to the state broadcaster, ETV, Mr. Abebe noted that will also enable Ethiopia to cut hard currency spending to import paper products. In addition to import substitution, the company’s will also export its products and o generate hard currency for Ethiopia, according to Mr. Abebe, who stated that the planned annual production capacity of the company will be one million tons of paper products.

Reports show that Ethiopia, which spends hundreds of millions of dollars importing many kinds of bamboo products including furniture and toothpicks, has over a million hectares of its land covered with bamboo forest.

The remaining Chinese foreign direct investment to Ethiopia announced this week include, another Chinese company, CGOC, which has agreed to open processing of cattle and sheep meat in Awash Febntale area of Ethiopia investing $215 million. While another medical equipments manufacturing company has also agreed to come to Ethiopia investing $75 million in a manufacturing plant in Kilinto Industrial Park in Addis Ababa. ETV report also stated that another Chinese company has also agreed to invest in printing industry in Ethiopia. 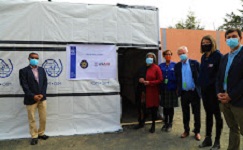