The Government of the Republic of Mozambique and the African Water Facility (AWF) has entered into a grant agreement for a feasibility study on Urban Sanitation, Drainage and Solid Waste Management in Chimoio and Inhambane.

The grant agreement was signed on January 27, 2017 by the Minister of Economy and Finance Adriano Afonso Maleiane and the Country Manager for the African Development Bank Joseph M. Ribeiro.

The project was launched in workshops in Maputo on March 8, in Chimoio on March 9 and another one will be held in Inhambane on March 14. This AWF €1.6-million grant project will contribute to improve livelihood conditions and climate change resilience for the 310,000 citizens of the Municipalities of Chimoio and Inhambane. This will be achieved by reducing the risk of flooding and improving the public health.

Recurring floods. Mozambique is regularly affected by severe floods. Recently, the Inhambane Province’s local population was severely impacted by the strong winds and flooding brought about by the Tropical Storm Dineo. Such event, reinforces the need to mitigate the impacts of climatic disasters.

The effects are aggravated by a combination of insufficient storm water drainage, sea intrusion and old and collapsed sanitation systems. Further, Sanitation coverage is low in Mozambique.

Commenting on the project, the AWF Acting coordinator, Jean-Michel Ossete, said, “The AWF Development Plan and Feasibility Study for Urban Sanitation, Drainage and Solid Waste Management project will pave the way for investments aimed at improving climate resilience and health in the two municipalities. This will be achieved through improved services in sanitation, drainage and solid waste management. Not only will we reduce the risk of flooding but we will also improve people’s health. The Development Plan covering the next 20-25 years will lead to increased investments in climate change adaptation, specifically in sanitation, drainage and solid waste management infrastructure and services, to the tune of €30 million by 2020.”

Optimizing the project implementation for better results. The project launching events in Maputo and Chimoio involved the main stakeholders of the project, including representatives from Mozambique’s National Directorate for Water and Sanitation, the AWF and the African Development Bank, the project’s executing agency, Chimoio municipal authorities and other selected ministries. The launch workshops were organised to ensure an efficient and smooth implementation of the project. 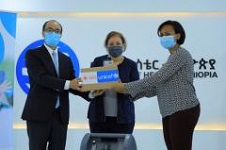