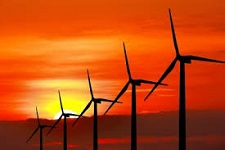 The Ethiopian Parliament this week granted its final approval for the loan agreement signed by Ministry of Finance and Danske Bank for financing for the 100 megawatts Assela Wind Farm Project.

This marks the end of financial negotiations and the beginning of the execution phase of the Assela Wind Farm, financed by the Danish government. The project is about wind power generation of 100MW capacity from 29 wind turbines, and will harness a part of Ethiopia’s enormous wind potential. The wind farm is expected to generate 330,000KWh annually and supply sustainable power to over three million people, according to the press statement from the Danish Embassy in Addis Ababa.

“I am pleased to see the agreement to develop the Assela I Wind Farm, which will diversify the Ethiopian renewable energy mix, has been passed by the Parliament. I am grateful to the Danish government’s generosity to provide grant and concessional finance. As a capacity development, Ethiopia will also learn and benefit immensely from Danish wind energy companies in terms of generation and operation of wind energy,” said Dr. Seleshi Bekele, Minister of Water, Irrigation and Energy, MOWIE.

The signing of the loan agreement for construction of the Assela Wind Farm Project affirms the strong Ethiopian-Danish cooperation in the energy sector. Since 2017, Ethiopia has cooperated with the Danish government on the development of the Ethiopian capacity in green energy, especially in relation to expansion within wind energy and how to integrate flexible renewable energy into the electricity grid system.

The cooperation between Ethiopia and Denmark is part of the Danish Government’s goal to create partnerships in obtaining access to energy and sustainable economic growth, in line with SDG 7.

“We are very pleased to see this project develop, and that we are now moving towards the construction phase. Access to sustainable and reliable energy is crucial to Ethiopia’s continued development. Denmark is very happy to be able to support Ethiopia’s ambitions to develop a climate-resilient green economy,” said Ms. Karin Poulsen, Danish Ambassador to Ethiopia.

The contracting amount for the Assela Wind Farm Project amounts to approx. 146 million EUR, which Danida Sustainable Infrastructure Finance (DSIF) is funding through a concessional finance model consisting of a grant and a loan module. The Danish contribution accounts for approx. 95 million EUR, and covers the cash grant, interest subsidy and loan guarantee.

The Assela Wind Farm will be located about 150Km south of the capital, near Iteya town in Oromia Regional State, and will be constructed by Siemens Gamesa Renewable Energy. Electric access in Ethiopia is low, with approx. 60 million – over half of its population left without access to electricity.

As per the National Electrification Plan, the political objective is to provide access to electricity for the entire population, 65% from the grid and 35% from solar off-grid technologies. Electricity supply is dominated by hydropower plants due to the huge resource potential at normal periods, but power generation is vulnerable during periods of water shortages and widespread drought, causing long periods with power cuts.

By harnessing the huge wind potential in the country and increasing the utilization of wind power, the water resources last longer and create greater resilience to the effects of climate change.