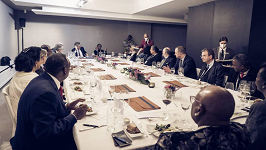 The Tana Forum Roundtable discussion held as a sideline event at the 58th Munich Security Conference in Germany focused on transnational organized crimes in Africa.

The forum was held yesterday under the title: ‘Rethinking responses: Terrorism, violent extremism and exploring the causes of such challenges and proposing possible solutions.

The Deputy Prime Minister and Foreign Minister of Ethiopia, Demeke Mekonnen, who participated in the Forum said armed conflicts, insurgency, terrorism, violent extremism, trafficking, and organized transitional crimes have made the Horn of Africa a hotspot in the global system, according to the information from the Ministry of Foreign Affairs’ of Ethiopia.

According to Mr. Demeke, the challenges that the Horn Region faces today could be traced back to a failure in managing transitions and elections, ethnic differences, transboundary resources, and interventions by global and regional powers.

More than eight speakers, including politicians and renowned academicians, reflected on the challenges in the Horn of Africa and way-outs to meet the problems with effective measures.

The event called on further commitment to abide by the maxim, “African Solution to African Problems,” and to enhance bilateral and multilateral Global North-Global South cooperation.

Attendees have also emphasized the need to forge strong working relationships among intergovernmental organizations, civil societies, academia, and the media.