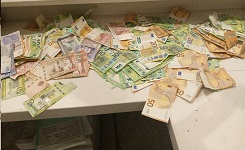 Ethiopian Customs commission said within just one week period it has seized worth 156 million Birr contraband goods from smugglers who attempted to smuggle the goods into the country and out of Ethiopia.

Of the total captured merchandizes, 60.4 million Birr valued are captured from contraband traders who tried to smuggle in the goods into Ethiopia from the neighboring countries. The majority of the captured goods worth 96.2 million Birr are seized from illegal traders trying to smuggle the goods out of Ethiopia.

Among the merchandizes captured leaving the country illegally are include fuel, currencies of different countries, coffee and livestock, according to the report of Ethiopian Customs Authority.

Some of the incoming merchandizes captured by the Customs include vehicles, clothes, electronics, cosmetics, medicines, narcotics, weapons, and edible oil, according to the report.