The Customs Commission of Ethiopia seized worth 40 million birr (about $1.2 million) contraband goods including firearms in six days period before April 27, 2020.

Most of the confiscated goods captured from smugglers were coming to Ethiopia from neighboring countries, while such as coffee were also captured leaving the country illegally. Some of the incoming smuggled goods captured include firearms, bullets, food items, cigarettes, perfumes, clothes and spare parts of vehicles, among others, according to the information from the Ministry of Revenue, which is in charge of the Customs Commission.
Several vehicles smuggled into the country without fulfilling legal procedures were also captured.

The custom posts, where the smuggled goods are captured are Dire Dawa, Moyale, Bahir Dar, Modjo, Addis Ababa and Jimma, among others, according to the information obtained from the official social media page of Customs Commission of Ethiopia. Reports show that Illegal border trading by organized criminals including corrupt military Generals, which involves medicines, narcotic, weapons, foreign currency notes of different countries and consumer goods has been growing in Ethiopia over the past few years.

Over the last nine months, Customs Commission of Ethiopia has seized goods worth 1.7 billion birr (about $51 million at current exchange rate).
The Commission recently stated that it has donated worth 1.6 billion birr ($48 million) goods to all regional states of Ethiopia to help them build their capacities in the fight against the spread of COVID-19 and its negative impacts on the community. 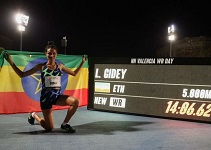