The federal police of Ethiopia has arrested individuals in Addis Ababa who were committing crimes wearing police uniform. The phenomenon is very unusual in the history of Ethiopian police.

Two of these criminals were arrested in Bole sub city Karamara area in Addis Ababa, according to the federal police head Commissioner General Endeshaw Tasew, who indicated that such crimes have also been recorded in other parts of the country.

“We have identified the areas where such crimes have been committed. For instance, two crimes with the people in police uniform have been committed in Addis Ababa Bole area. We captured these individuals and investigating them. We will make public our finding when we complete the investigation,” he said.

4378 Kalashnikov bullets captured
In another development, the police have captured 4378 Kalashnikov bullets in the eastern part of Ethiopia. Three individuals who were transporting the bullets with a Makarov pistol in a Toyota Corolla car are arrested, according to the Assistant Inspector Tekachew Mekonnen, who spoke with a federal police TV program reporter. 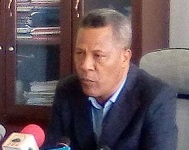