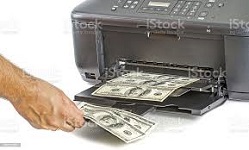 The suspect is capture with over $2 million 100 dollar notes he printed in a house he rented in Bole sub city in the capital, Addis Ababa, according to the Federal Police news report aired this morning on the state broadcaster ETV.

The suspect is arrested in his house with the exhibit, which includes color printer, ink papers prepared in $100 note size and a computer, a bag full of $2.475,000 fake $100 notes, among others after tipsters informed the police, according to the report, which indicated that the suspect has been converting the fake dollar notes into local Ethiopian Birr.

It is stated that the suspect has tried to escape before the police raid. The Cameroonian found engaged in faking U.S. dollar notes was capture along his collaborator, according to the report, which urged the public to be cautious of suspected activities of the people to whom they rented their houses.