The company aims to export processed sesame known as Tahina and generates $10 million annually by processing 3,700 metric tones of sesame. Speaking at the inauguration, Mr. Yohanes Sintayehu, State Minister of Industry indicated that the government will continue to support such investments, which processes agricultural commodities that contributes to increase of export earnings and job creation.

Ethiopia has been earning around $300 million from export of sesame every year. Ethiopia has high quality sesame seed varieties suitable for wide range applications, according to the oil seeds producers association of Ethiopia. It says the one that grows around Humera area in the northern part of the country is popular worldwide for its aroma and taste.

Including sesame oil seeds have been among the major export items of Ethiopia. Sesame and Niger seed are the major oil seeds products of the east African country.

Meanwhile the country’s income from all oil seeds exports in recent years has not been been as planned. For instance in the first five months of the current Ethiopian fiscal year began July 8, 2018, Ethiopia earned $143.9 million from oil seeds export.

The fact that many companies export raw seeds with out processing and adding value is often mentioned as among the reasons for the decline of the export income of Ethiopia. While others suggest that contraband trade and fluctuation of global prices are affected the income. As a result, Ethiopia’ agricultural commodity dominated export sector has not been performing well.

In fact over the past few years, Ethiopia’s export earnings has been declining. The country now earns a total of around $2.8 billion per year including from export of minerals and industry items. On the contrary the import bill of the country has been growing exponentially exceeding $17 billion per year.
Many experts have been advising Ethiopia to process its agricultural products including coffee, which is Ethiopia’s major export item generating around $800 million every year. 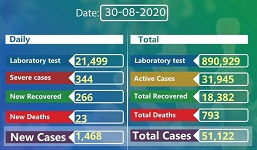