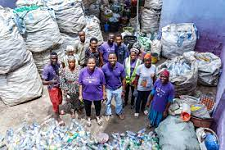 More and more plastic waste is being diverted from landfills and into a circular economy that grows employment and entrepreneurship in African countries, as we celebrate Global Recycling Day today (March 18).

Food and beverage packaging is an important part of modern life, helping to ensure food safety and reduce food waste, yet the world has a packaging problem that requires a comprehensive response. As part of its responsibility to help address this challenge, Coca-Cola Beverages Africa (CCBA), together with The Coca-Cola Company, has set ambitious goals to help collect a bottle or can for every one it produces by 2030, use 50% recycled content in all packaging and make 25% of its packaging reusable by the same year, while making all its packaging 100% recyclable by 2025.

The initiative, called World Without Waste, relies on partnerships with customers, consumers communities, industry, and governments to succeed. With many initiatives underway across CCBA’s territories, a few recent highlights include the move to clear Sprite PET in six markets which makes it much easier to recycle and has greater value as a recyclable material.

Another milestone is the extension of the PETCO model, which is based on the principle of Extended Producer Responsibility, to three additional markets since its inception in South Africa and plans for further rollout to a total of eight markets. CCBA also started using returnable 2L PET in South Africa with the view to roll this out to other markets.

“We use our industry leadership to be part of the solution to achieve positive change in the world and to build a more sustainable future for our planet,” she said.

Locally, in Ethiopia, 263 women who made living collecting firewood in and around Entoto mountain were left without work when the Entoto Park opened. CCBA supported them to start PET collection in the park and its vicinity, sorting and providing it to recyclers. They now collect about 10 tonnes a month. They were also trained to weave baskets from recycled plastic as an additional income stream.

Another association has been established in Addis Ababa, providing jobs to 49 people, who received training and were supplied with a baling machine and personal protective equipment.

CCBA has also introduced a Sprite clear bottle in Ethiopia and other markets, which has greater value as a recyclable material.

In Uganda, CCBA partnered with the local council, recycling companies, and Koyinawo Waste Management Services to clean up Mbarara City by collecting plastic waste in the communities of Makenke and Lubiiri.

The clean-up drive contributed to the company’s commitment to collect 75% of bottles produced in 2022 and saw the collection of 676kg of plastic.

The Rethink Plastics campaign was launched at Kiswa Primary School by the Uganda Scouts Association in partnership with Worldwide Fund for Nature and CCBA under the theme ‘Rethink Plastic, Saving our planet together, one challenge at a time. The campaign seeks to create awareness and grassroots education on the responsible use and disposal of plastic waste across the country.

In Kenya, to meet the growing need to provide sustainable recycling solutions in the modern trade, CCBA engaged partners in hotels, restaurants, and cafes to create a model that linked the customers to recyclers, supporting the collection and proper disposal of plastic waste.

Since the last quarter of 2021, CCBA has entered into 10 such partnerships covering Kisumu, Nairobi, and Nyeri. This collaboration has provided a much-needed boost to the collection of PET bottles, with about 1.5 tons of plastic waste delivered to recyclers over the past five months.

CCBA also established the Ngong Hills waste management and recycling project, in partnership with the Kenya Forestry Service and the Go Green Club. The project has created awareness and a waste management system at Ngong Hills forest and environs, as well as livelihoods for 19 youth from the Go Green Club, achieving an average of 1 ton, collected a month for a total of 5 tons to date.

In Tanzania, CCBA in collaboration with its recycling partner Sunda Chemical Fiber, has recycled more PET than it produced, achieving a recycling rate of 113% over the past two years.