The African Minerals Development Centre (AMDC) will host a panel session during the Ministerial Session of Mining Indaba under the auspices of the African Union Commission and the United Nations Economic Commission for Africa (ECA).

The Ministerial Symposium has started yesterday as a pre-event to Mining Indaba, begin on 6 February 2017. The discussion will focus on domestic resource mobilization through strengthening partnerships to stem the illicit financial flows from the mineral sector in the region.

The African Union Heads of States endorsed the Africa Mining Vision (AMV) in 2009 to support countries’ efforts in permanently shifting the paradigm towards sustainable socio-economic development. As the secretariat of the AMV, AMDC supports African countries in holistic and comprehensive approaches towards designing and implementing concrete and practical AMV-compatible reforms.

This includes enabling governments and business to work together in creating effective legislations; as well as designing an enabling environment that is transparent and fair to mining companies and all other businesses.

The panel session, which is a key highlight of the Ministerial Symposium (also known as AMV Day), will feature key leaders in the mining industry.

They are expected to delve into ways of deepening engagement between governments and companies to curb illicit financial outflows and increase domestic revenues from mining. To frame the session’s discussions, Fatima Haram-Acyl, Commissioner for Trade and Industry of the African Union will deliver introductory remarks.

The keynote address will be delivered on behalf of President Thabo Mbeki by Raymond Baker, who is a member of the ECA-AU High Level Panel on Illicit Financial Flows led by the former President of South Africa.

The panelists include chief executives of global mining companies, mining Ministers, the ECA, and world-renown experts on illicit financial flows and domestic revenues from mining.

ECA, together with the African Union (AU), set up The High Level Panel on Illicit Financial Flows from Africa (HLP) to address the debilitating problem of illicit financial outflows from the region. ECA will be represented by Aida Opoku-Mensah, Head of Special Initiatives in the Office of the Executive Secretary.

“Given the mosaic of actors and ongoing and prospective initiatives on the different dimensions of IFFs at national, regional and global levels, there is need for coherence, coordination and complementary of partnerships; the mining industry is a key partner in this regard.” says Ms. Opoku-Mensah. 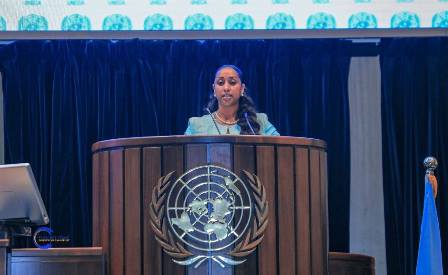 LAPSSET enhances trade, logistics within the region and beyond