African countries seeking to reduce the cost, time and complexity of interregional and international trade in goods will gather tomorrow for the First African Forum for National Trade Facilitation Committees in Addis Ababa, Ethiopia.

The meetig  comes as Africa scales up its trade easing efforts after the World Trade Organization’s Trade Facilitation Agreement entered into force in February 2017 and as it prepares to implement the Africa Continental Free Trade Agreement (AfCFTA) signed in March 2018.

The landmark event, organized by the United Nations Conference on Trade and Development (UNCTAD) and seven partner organizations.

The World Trade Organization calculates that current trade costs for developing countries are equivalent to applying a staggering 219% tariff on international trade, and this hurts Africa,” UNCTAD Secretary-General Mukhisa Kituyi said. “UNCTAD has supported Africa’s work on trade facilitation for decades, including with our ASYCUDA automated customs systems, and capacity building programmes. The culmination of this work is to support the institutions that can make trade work for all, and National Trade Facilitation Committees must become the agents of change to boost international trade for developing countries.”

A central cog of the Trade Facilitation Agreement is the obligation of each country to set up a National Trade Facilitation Committee (NTFC) with public and private sector stakeholders “to facilitate both domestic coordination and implementation of the provisions of this agreement”.

With well-functioning NTFCs, countries will be able to make trade easier, faster and cheaper. For developing countries, and especially least developed countries – the majority of which are in sub-Saharan Africa – full implementation of the Trade Facilitation Agreement could lead to a reduction in trade costs of up to 15%.

Trade facilitation reforms are also positive steps towards human, enterprise and institutional development, and link to achieving the 2030 Agenda for Sustainable Development, making their enactment a win-win for all.

Anticipating this, the Trade Facilitation Agreement contains important and novel provisions on so-called special and differential treatment that allow developing countries to choose their own implementation schedules – and get implementation assistance if needed.

“By coming together to share experience, learn lessons on common challenges, and meet with development partners, participants at this event will be equipped to redouble their trade facilitation efforts,” Shamika N. Sirimanne, director of UNCTAD’s division on technology and logistics, said.

“The forum is the result of close collaboration between multilateral and international organizations and is supported by several bilateral donors. The alliance showcases the collaborative effort of these institutions and donors to assist in moving forward opportunities for developing and least developed countries to integrate into globalized trade,” she added.

Topics covered during the three-day event include the role of African regional organizations, the role of NTFCs in the implementation of trade facilitation provisions in the AfCFTA, paperless initiatives at entry points, the involvement of the private sector in NTFCs, how to coordinate border agencies, and the role of transit corridors.

There will also be sessions on the gender dimension in cross-border trade, and the application of digital technologies in future modes of trading at a time when e-commerce becomes ever more important in international trade. 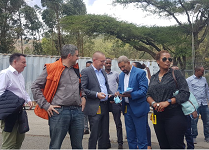