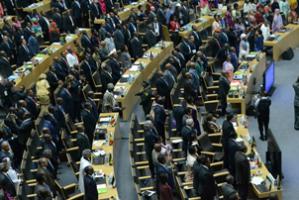 While Africa has made significant progress, the great challenge that lies before us is how to deliver on the full promise of the global 2030 Agenda and Agenda 2063 for Africa and its people.

The statement was made by UN Deputy Secretary-General Amina Mohammed at the opening of the 29th Ordinary Session of the Assembly of the African Union.

She called on the two organizations to strengthen partnership, build new bridges and fortify bridges that already exist. The partnership between the African Union and the United Nations, she said, has centred on progress in key areas, including the adoption of a Joint Framework for Enhanced Partnership in Peace and Security. In addition, the two organizations have agreed to prepare a joint framework on sustainable development, focusing on the implementation of Agenda 2063 and the 2030 Agenda.

On peace and security, Ms Mohammed reiterated the UN’s support to the AU’s Silencing the Guns by 2020 initiative and stressed that the efforts of the two institutions should continue to be based on urgency, flexibility and innovation, to improve complementarity, cost-effectiveness and impact. She also commended the AU member States for the decision to fund 25 per cent of the AU’s peace and support operations by 2020.

The Deputy Secretary-General also welcomed the establishment of the AU Peace Fund, whose Board of Trustees the UN has been invited to serve and hailed it for going beyond peacekeeping to supporting preventive diplomacy and institution-building.

In addition to enhancing partnership with the Regional Economic Communities on peacekeeping efforts, elections and democratic transitions, she stressed the need for the AU and UN to work with the African Peer Review Mechanism as a vital partner and enhance the joint monitoring and reporting framework currently being established to ensure efficient and coherent implementation of the 2063 and 2030 agendas.

Ms. Mohammed also indicated that the UN has continued to support African integration, including efforts to establish the Continental Free Trade Area as well as technical support for mapping intra-African trade and analysing regulatory frameworks. She urged countries to take advantage of the Chinese ‘Belt and Road’ infrastructure initiative in order to scale up investments in Africa’s infrastructure for regional economic integration.

Touching on President Paul Kagame’s initiative on reforms to strengthen the AU Commission’s work, she noted that they will make the African Union “an employer that is sought after by the many young people on this continent who are passionate about making a difference”.

“We must never stop building bridges towards one another, overcoming broken promises on both sides by fortifying them to bear the weight of the expectations we have for one another, and that the world has for us,” she said.