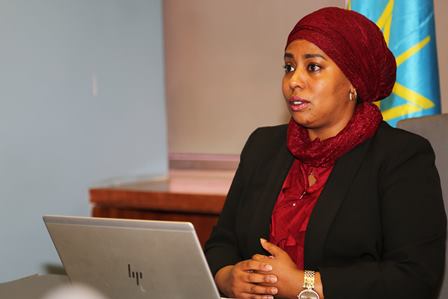 H.E. Yasmin Wohabrebbi, State Minister of Finance participated in a virtual Africa Investors conference. The conference was organized by the Standard Bank and ICBC Standard Bank.

The meeting focused on explaining monetary and fiscal policy reforms in African countries. It was also used to explain economic trends seen in the African continent and what these mean for each country.

More than one thousand delegates joined the meeting to hear first-hand conversations between some of Africa’s most senior and leading policymakers, renowned industry leaders, and speakers from prominent organizations across Africa and the rest of the world.
Topics covered ranged from digital infrastructure, sustainable technology advances, AfCFTA, as well as economic overviews for many African countries. State Minister Yasmin representing the Ethiopian government explained the unprecedented political, social, and economic reforms taking place in Ethiopia over the past three years.
She said bold reform measures are being undertaken to widen the political space for citizen’s participation and accelerated effort to build independent and reliable democratic institutions.
She underscored how these efforts are already bearing fruit by transforming the framework in which society and state Interact.
She also briefed the participants about the economic reforms being implemented in Ethiopia and said because of these reforms Ethiopia’s economy is on a path of strong and sustainable growth.
(Ministry of Finance of Ethiopia)