Prime Minster Abiy Ahmed of Ethiopia, who was in a two – day’s state visit in South Africa invited South African businesses to invest in his planned privatization of state enterprises.

“Ethiopia is now opening up to private capital in telecommunications, energy, logistics and other industries which South African investor’s have great experiences on this fields,” Prime Minister Abiy Ahmed of Ethiopia said during his visit in South Africa over the weekend.

He invited South African companies to take part in his planned privatization of state business enterprises including in telecom and energy sectors.

Abiy said that South African investors have great experiences in running businesses in such areas as, telecommunication, energy and logistics, which the Ethiopian government plans to privatize, according to South African Broadcasting Corporation (SABC).

SABC reported yesterday from Johannesburg that the prime minister has made the call during the briefing to the media following a bilateral and diplomatic relations meeting with President Cyril Ramaphosa at The Union Buildings in Pretoria on Sunday.

“we also discussed the way in which we could boost our trade volume between our two countries considering the great potential that exists particularly through the opportunities that the African Continental Free Trade Area provides for bilateral and intra-regional trade,” Prime Minister Abiy said. 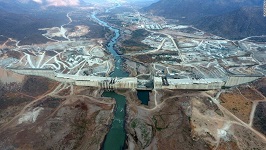