The Addis Ababa Chamber of Commerce and Sectoral Association (AACCSA), which has rebranded itself with a new logo,  is set to host a fundraising event for the construction of its new 22 story headquarter in Addis Ababa, Ethiopia.

“We have planned a big fund raising event where prominent business people in Africa including Nigeria’s billionaire Aliko Dangote, will be speaking,” said Elias Genete, President of AACCSA.

Other multinational corporations’ CEOs have also confirmed to reflect on different topics at the fundraising and business forum, which is set to attract some 800 guests, according to Mr. Elias.

AACCSA has already secured 3,000 square meters of land from the Addis Ababa city Administration to start construction of the new HQ with a total investment of 300 million birr (around $11 million).

Commenting on the significance of a new bigger HQ, Mr. Elias stated that the main reason for the a new headquarter is to meet the increasing need of the business community and have ample spaces for the new services the country will be introducing in the near future such as, stock market and commodity trading as well as ICT based businesses.

“We also need to provide sector specific services for our members. We don’t want to remain only implementers of government policy, but also involve actively in policy formations that affect the private sector,” he said.

Justifying further the need for a new bigger building, if the vision envisages for Addis Ababa by the city administration has to be realized, the entire fabric of business practice and commercial facilities need to be changed towards the standards of the 21st century, according to AACCSA argues. 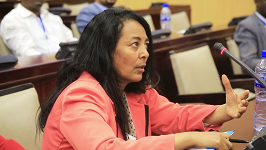