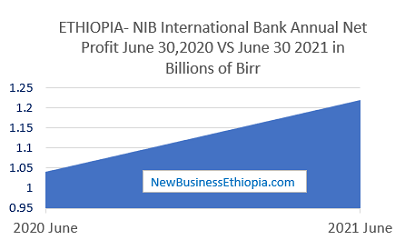 Nib International Bank (NIB), one of the private banks in Ethiopia, reported close to 1.22 billion Birr annual profit after tax for the year concluded June 30, 2021, which is about 17 percent up from previous year.

This is indicated this morning during the annual meeting of the shareholders of NIB at Inter-luxury Hotel in Addis Ababa, Ethiopia. The total assets of NIB has also increased to 542 billion Birr (27.6 percent) from the preceding year.

Loan and advances, which constitutes the lion’s share of the assets, increased by 33.8 percent from previous year and stood at 34.2 billion Birr.

NIB has paid total income tax of close to 407 million Birr, which is 141 million Birr more than it paid last year, according to the financial statement of the Bank.

During the budget year concluded June 30,2021, Nib has opened 79 new branches across the country of which 41 are in the capital, Addis Ababa. This has increased the total number of the branches of the Bank to 381. It is recalled that NIB has recently inaugurated its 37-story headquarters building in Addis Ababa. 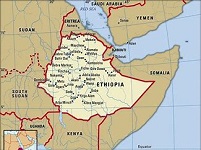