European Union’s Commissioner for International Cooperation and Development Neven Mimica, announced a support package of €165 million to address the multiple crises in the Horn of Africa region.

The commissioner announced the funding today on the occasion of the official visit to the African Union in Addis Ababa, Ethiopia.

Commissioner Mimica said: “The sooner we act, the more lives we can save. This package of €165 million will support the urgent needs of South Sudanese people in the country and the region but also the millions of people at risk of famine in the Horn of Africa. With this additional support, the EU shows the way to other members of the international community to also respond urgently.”

Commissioner for Humanitarian Aid and Crisis Management Christos Stylianides said: ”The European Union is responding immediately to the needs arising from the severe famine in South Sudan and the dire droughts in Somalia, Ethiopia and Kenya. With this new assistance, we will do our upmost to contain the effects of these extremely challenging circumstances in the Horn of Africa.”

From this package of support, €100 million will be allocated to respond to the humanitarian crisis caused by the violent conflict in South Sudan. Out of this, €30 million will provide lifesaving assistance to vulnerable people in South Sudan. Assistance will offer protection to women and children at risk, or victims, of human rights abuses, as well as support to treat alarming levels of malnutrition, diseases and water and sanitation.

The remaining amount of €70 million will support South Sudan’s neighbouring countries, notably Ethiopia, Uganda, Kenya and Sudan, to continue providing protection and addressing the needs of South Sudanese fleeing conflict and seeking shelter in their territories.

The second part of the package, in the amount of €65 million, is planned to respond to the serious droughts in Somalia, Ethiopia and Kenya. Changing climatic conditions and successive failed rains during the past three years are triggering a humanitarian crisis of huge proportions.

The negative effects of the droughts are likely to intensify in 2017, as rains are projected to be below average during the next rain season. The situation is particularly dire in Somalia, where the number of people in need has increased drastically to 6.2 million, that is half the population, and where there is a real risk of famine later in 2017. A pre-famine alert has already been issued in February of this year.

This new package will also scale up and strengthen over €400 million that the EU allocated in 2016 to address the humanitarian crises and the effects of El Niño in the region. It will also complement the €200 million which the EU approved in February this year to support the new Government of Somalia to continue transitioning out of fragility and building a resilience society. 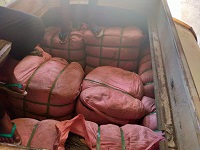