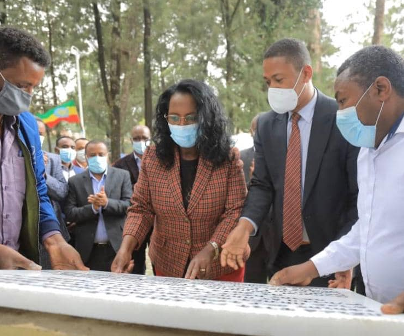 A foundation stone has been laid today to build the East Africa Region Technical and Vocational Education Training (TVET) Center of Excellence in Addis Ababa.

The Government of Ethiopia has secured 150 million USD fund from the World Bank to  strengthen 7 selected TVET centers of excellence, including General Wingate Polytechnic College (GWPTC), in skills development in identified priority sectors, it was learned.

GWPTC is one of the selected beneficiary TVETs under the World Bank fund implemented through the East African Skills for Transformation and Regional Integration Project with about 14.85 million USD allocated to make the college’s Electrical and Electronics Department a center of excellence in areas of electrical and digital application.

Science and Higher Education Minister, Samuel Urkato said on the occasion “the center of excellence in the 75-year old college will train Ethiopian citizens and others in neighboring countries.”

In line with the ministry’s 10-year plan that focuses on producing skillful youth, the ministry is intent on promoting the college to a university, he added.

Addis Ababa City Deputy Mayor, Adanech Abiebie on her part lauded the World Bank for its  financial support to promote selected TVETs, including the famous GWPTC.

TVETs are instrumental in producing citizens with practically developed skills and knowledge that could be easily altered into tangible entrepreneurship and investments vital for development, she noted.

“This institution in particular deserves to be promoted to a university, considering the human resource it has produced and the experiences accumulated in the past,” the deputy mayor stated, adding that the city administration is committed to supporting the college.

Established in 1946 as General Wingate Secondary School in memory of the British Colonel Charles Wingate (later Major General), who helped Ethiopia in its struggle against Italian Fascism, the polythetic school is celebrating its 75th year anniversary. June 29/2021(ENA)