The NEPAD-IPPF (Infrastructure Project Preparation Facility) has approved US $3.88 million in grants to the Governments of the Democratic Republic of Congo (DRC), Mozambique and Zambia to finance completion of regional projects preparations.

The two Regional Interconnectors – Kolwezi (Democratic Republic of Congo) and Solwezi (Zambia) – received US $1.98 million and Zambia-Mozambique US $1.9 million, excluding US Trade and Development Agency (USTDA) co-financing worth US $0.8 million. The NEPAD-IPPF grants are to help fund full feasibility studies, including detailed design and tender documents of the proposed high-voltage direct current (HVDC) 330-/400-kV transmission lines within two years. The projects have already attracted downstream financing interest from donors in the region and other financial institutions.

The two interconnectors are amongst the key corridors in the Southern Africa Power Pool (SAPP) network architecture within the regional grid, to assure region-wide provision of quality, reliable and secure electricity, to commercial and economic centres (such as the Katunga and Kalumbila copper mines). In the long term, they constitute the building blocks to connect the north-south and east-west Southern African Development Community (SADC) power grid.

Both interconnectors will increase the transmission capacity within the SAPP as well as enhance energy security for the respective countries. In addition to reinforcing and building resilience in the current grid, the interconnectors will significantly help to increase trade flows, deepen power trading markets in the region and in Africa as a whole.
The interconnectors will help to create an enabling environment for private-sector participation by assuring a ready regional offtake of power generated.

The most immediate environmental benefit would emanate from increased use of existing hydropower plants over fossil fuels, crowding out fossil fuels to a large extent, along with increased efficiencies in generation. By helping to direct power from cleaner sources to deficit states, the projects will mitigate risks from climate change-induced droughts as these droughts triggers power deficits and force countries to seek short-term carbon-intensive solutions.

The projects directly support the African Union’s Programme for Infrastructure Development in Africa (PIDA).
Tonia Kandiero, African Development Bank Director General, South Africa Regional Development and Business Delivery Office, said, “The two interconnectors lay the building blocks to further the Bank’s High 5 agenda, especially Light up and power Africa, Industrialize Africa and Integrate Africa.” She added that, “They are part of critical infrastructure that, when developed, would lead to job creation and economic development besides mitigating climate-induced droughts in the region.”
Judith Kateera, the AfDB Alternate Executive Director for Angola, Mozambique, Namibia and Zimbabwe, said adequate supply of power is at the heart of socio-economic transformation of member states. It is also an imperative in private-sector development, as industry relies on it for production of goods and services, she said.
The project has been welcomed by the beneficiary countries as well.

Eric Mbala Musanda, Managing Director of Société nationale d’électricité (SNEL) in the DRC, said, “The Kolwezi-Solwezi Interconnector project will contribute enormously to the stability of both the Zambia Electricity Supply Corporation Limited (ZESCO) and SNEL networks, especially in the southern part of the DRC. SNEL attaches great importance to this second interconnector between the two utilities’ networks by increasing the power transit capacity between the two countries and the volume of energy trade between SNEL and ZESCO, on the one hand, as well as with other SAPP members on the other hand.”

Zambia, as intermediate country for both interconnectors, will enable power interchange, contributing to energy security and SAPP trading.

“The energy crisis that Zambia has experienced is very painful,” said Webster Musonda, Director of ZESCO, Transmission. “But even more painful is that we could not import available power at times from the SAPP because of transmission path constraints. The Mozambique–Zambia Interconnector project will go a long way to mitigate the congestion in the SAPP network. The Kolwezi–Solwezi interconnection will support the SNEL network in the Katanga area and also provide additional transmission capacity for exports from Zambia and other SAPP member countries to DRC, and the other way round when the tide changes. We are grateful to NEPAD-IPPF, AfDB and SAPP for supporting the two utilities to carry out the cross-border feasibility studies for the transmission line.”

The signing ceremony took place on March 6, 2017 at the AfDB offices in Harare, Zimbabwe, which is located in the Southern African Development Community region. The signing was witnessed by Mary Monyau, Officer-in-Charge for the AfDB Country Office in Zimbabwe, who gave a vote of thanks to the SAPP Acting Coordination Centre Manager, Alison Chikova, for the long-term partnership between the Bank and the SAPP.

NEPAD-IPPF is a multi-donor special fund that supports African countries to translate major continental initiatives such as the African Union’s Programme for Infrastructure Development in Africa (PIDA) as well as Regional Infrastructure Master Plans of the Power Pools into bankable, investment-ready projects.

The special fund is currently supported by the AfDB as host institution, Canada, Germany, the UK, Denmark, Norway and Spain. The replenishment for the new financing cycle for the five-year period, 2016-2020, is ongoing. As the demand for infrastructure projects increase so as to bridge Africa’s infrastructure gap, AfDB is inviting more donor partners to join the fund. Participation in the special fund is open to donors, institutional funds and other special infrastructure funds. 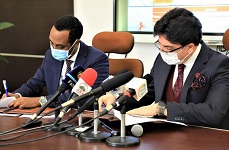