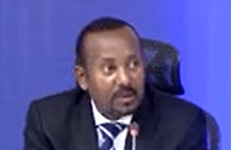 He made the remark speaking at the first general assembly of Prosperity Party, which elected him to serve as its President. “We shouldn’t allow sessession of Tigray from Ethiopia…We souldn’t also allow the people of Tigray to starve,” he said, indicating that the people of Tigray are not TPLF (Tigray Peoples Liberation Front).

Abiy indicated that Ethiopia’s democracy shouldn’t be the kind of democracy that risks the unity of the country. “We don’t differentiate the issue of Tigray people with that of Benishangul and Gambella regions,” Abiy said, during the assembly televised today on the state owned ETV language channel.

Regarding the war in the neighboring regions, Abiy indicated that there is no much conflict in Amhara region. It is not as what we read on facebook, he said, indicating that there are provocations by TPLF in some areas in Afar region.

He indicated that the pain of an individual in any part of the country is also the pain of all Ethiopians. He urged his party members to work for benefit of all people in Ethiopia by thinking beyond their ethnic group.

Commenting on the revision of the constitution of Ethiopia, Prosperity Party President indicated that his party or other parties are not the one to decide. It is up to the people of Ethiopia to actively involve and decide. Prosperity is open to accept the will and decision of the people.

“We [Prosperity Party] do not believe that constitution is untouchable like holly Bible or Holly Quran,” he said indicating that the people in Amhara region believe that they haven’t taken part in the drafting of the current constitution and such issues will be addressed by the national dialog.