In Addis Ababa there are more than 22,000 urban-based refugees. This comes at a time when global forced displacement figures reached 68.5 million, according to the United Nations Higher Commissioner for Refugees’ (UNHCR’s) Global Trends report 2017.

Among them were 16.2 million people who became displaced during 2017 itself, either for the first time or repeatedly – indicating a huge number of people on the move and equivalent to 44,500 people being displaced each day, or a person becoming displaced every two seconds.

In order to celebrate the courage and resilience of the refugees in Ethiopia and elsewhere as well as to focus the public’s attention on their plight, UNHCR together with the government refugee agency-ARRA- and other partners, has been organizing different activities to mark World Refugee Day focusing on the need for solidarity with refugees.

All the 26 camps and other refugee sites across the country are organizing World Refugee Day events with activities ranging from sports activities and cultural shows to tree planting, cleaning the environment, recognizing the contributions of refugees to their communities as well as blood donation. 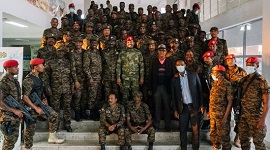 Ethiopia’s next battle, the saboteurs within