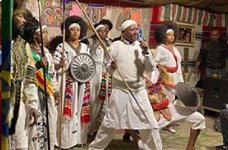 Ethiopians today celebrated the 125th anniversary of the Battle of Adwa, the first African victory over European colonialists in in 19th century.

Ethiopia patriots led by the then Emperor Menelik II of Ethiopia, has defeated the well-armed Italian army within six hours at the Battle on Adwa on March 1, 1896. Had it not been all Ethiopians together marched at the Battle of Adwa, Ethiopia could have celebrated today independence day like other African countries instead of victory day, according to Prime Minister Abiy Ahmed who issued a statement congratulating the people of Ethiopia.

He noted that the Victory of Adwa has inspired many African countries to fight colonialism and declared their independence. He further indicated that Ethiopians tolerate their leaders giving them time to come to their senses and correct their mistakes, meanwhile when they realize that it is danger to their national security their ignore their differences and stand together.

Meanwhile many make mistake and fail to underestimate the patience of Ethiopians and their unity when it comes to their sovereignty and independence, according to Abiy Ahmed. When Italian army invaded Ethiopia in 1896, thought that Ethiopians are divided and it was time to colonize the country.

“…Adwa is not only a victory. Adwa is Ethiopia’s brand…In general the Victory of Adwa has made what seems impossible possible,” Aby said. “Our journey is to take Ethiopia to the next level and break the record of Adwa. We have proven that we can. But we are yet to show that we can,” he said.