Following the political and economic reform launched a year ago, the Government of Ethiopia has released over 100,000 prisoners, says Prime Minister Abiy.

The figure includes some 45,000 benefited from the new amnesty law the country introduced right after launching the reform. Presenting annual report to the Parliament this morning, Prime Minister Abiy has stated that as a result of the political and economic reform 260 media outlets, which were blocked in Ethiopia are allowed to operate freely.

He also noted that in order address the public grievances, which has led to the current reform, many officials at different states are replaced by new blood, while the structures of some of the government institutions and laws are also being revised.

Some of the institutions which has gone through serious reform include, federal supreme court, intelligence, federal police, information network Security agency and national electoral board. He further stated that some of the laws revised and currently going through revision include civil society and charities law, anti0terrorism, trade, media and weapons handling laws.

Commenting on the total number of internally displaced people, PM Abiy stated that of the total 2.3 million, so far 2.1 million are returned to the areas from where they were displaced. Soon 130,000 are expected to return back home to their original location home. Reports show that the majority of internal displacement is the result of ethnic tensions and conflicts, while many are also internally displaced due to natural disasters such as drought and flooding.

In his report PM Abiy has also mentioned that of the total 2.3 million people who were internally displaced, 1.5 million were displaced within the same region. While the remaining 800,000 are displaced from one region and moved to another. 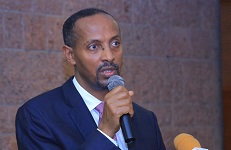