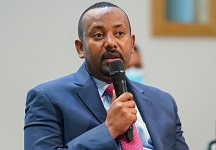 He made the announcement on his social media page today upon returning to his office from the battle field where he has been leading Ethiopian army against the terrorist group from Tigray region.
“I join other African leaders in reiterating that a continent of around 1.3 billion people needs a permanent voice and seat at the UNSC represented through a bloc. Issues and decisions that concern the continent cannot continue being addressed without continental representation,” Abiy twitted.

Abiy also indicated that today has consulted on the phone with leaders of neighboring African countries. “Ethiopia continues to prioritize strengthening relations with our neighboring countries. I’ve held extensive phone discussions today with the leaders of Djibouti, Kenya, Uganda, Somalia, Eritrea and South Sudan. We will continue working together on bilateral and regional issues,” he twitted.

Opposing the meddling of the United Sates in the internal affairs of Ethiopia and Eritrea, thousands of Ethiopians and Eritreans in the diaspora have been protesting over the past few months launching a popular pan African movement labeled #NoMore.

President Yoweri Museveni of Uganda who spoke on the phone with Prime Minister Abiy Ahmed of Ethiopia today also twitted: “I met the Ambassadors of the P5 (Permanent Members of the UN Security Council) plus Four non-Permanent Members at State House Entebbe. I reiterated Africa’s ability to solve African problems through strategic security.”

“I also opined that intervention in the African States by external forces if it must happen should take a TRINITY pattern: 1- Let them first solve their issues Internally, 2- Let them get help Regionally and if it fails 3- International intervention,” Museveni twitted.

It is recalled that the former President of Zimbabwe Robert Mugabe has been demanding the UN to give a permanent seat for the African continent, which has a total of around 1.3 billion people.
Currently only five countries, namely United States, United Kingdom, France, China, and Russia have permanent seat at the UNSC.

I met the Ambassadors of the P5 (Permanent Members of the UN Security Council) plus Four non-Permanent Members at State House Entebbe. I reiterated Africa’s ability to solve African problems through strategic security. pic.twitter.com/iXZeEz7JiS