The Governments of Ethiopia and Guinea have agreed to form a joint ministerial commission to strengthen economic ties between the two countries.

The two countries have identified agriculture, air services, health, science, higher education, culture and tourism as priority cooperation areas. President of Alpha Condé of Guinia who is in Ethiopia for three days diplomatic tour has witnessed the signing of the cooperation agreement accompanied by Prime Minister Abiy Ahmed of Ethiopia.

“Prime Minister Abiy noted the friendship between the two countries as a foundation for strengthening relations. President Condé on his part commended PM Abiy for the democratization processes that he is currently spearheading.”

Welcomed by Prime Minister Abiy Ahmed of Ethiopia on Thursday, the two leaders have discussed bi-lateral issues, on the margins of the AU summit.

Today President Condé’ visited the Eastern Industrial Zone in Dukem located some 40 kilometers from the capital, Addis Ababa. His visit was accompanied by President of Ethiopia Sahle-Work Zewde.

Guinea real GDP growth was an estimated 5.9% in 2018. Growth was attributed to the industrial sector (which grew by 8.7%), dominated by mining (15.3%), but the manufacturing sector grew by 3.2%, according to the African Development Bank (AfDB).

“The primary sector grew by 3.1%, and the services sector by 5.1%. Growth was bolstered by reforms aimed at improving the business climate, access to electricity, and investment in the agro-food sector,” AfDB says.

“On the supply side, GDP growth was driven by services (8.8% growth) and industry (12.2%), facilitated by the development of energy, industrial parks, and transport infrastructure,” it says.

On the demand side, private consumption and investment continued to drive growth, along with the government’s stable spending on public infrastructure and strong foreign direct investment inflows, according to AfDB. 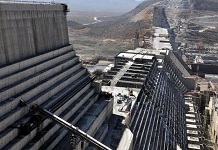