The Government of Ethiopian on Tuesday announced that it is ready to fully implement the decisions of the UN mediated Algiers Agreement Ethiopia and Eritrea signed in December 2000 to end the bloody war that consumed lives of over 100,000 from both sides.

The leaderships of the two countries were close friends and allies during the war against Ethiopia’s Marxist regime led by Mengistu Hailemariam. The civil war was concluded in 1991 giving birth to a new country in East Africa – Eritrea.

The decision was made during Ethiopia’s ruling party coalition, the Ethiopian Peoples’ Revolutionary Democratic Front (EPRDF) executive Committee meeting. The two countries went to war over a claim of a border town Badime, which according to Algiers Agreement was awarded to Eritrea.

Meanwhile as Ethiopia raised disagreements in relation to the demarcation and full implementations of the decision, the Algiers Agreement was not implemented to this date. Since then the two countries have been in dispute with many referred as, ‘no peace no war condition.

The meeting of EPRDF Executive Committee, which began on Tuesday, will be completed today. The two years old war has resulted in the death of around 100,000 people on both sides, expulsion of tens of thousands of people thousands of injuries and economic losses.

The decision was reached to make the region peaceful and strengthen the historic people to people relations between the two countries as well as contribute the development of the region, according to Ahmed Shide, Government Communications Affairs Minister of Ethiopia.

“…The dispute has hindered the growth capacities of both our nations. It has also been obstacle to the peace and stability of the region. The executive committee has decided to fully implement the decisions of Algiers agreement without any preconditions and become completely peaceful with Eritrea,” he said.

According to the Algiers Agreement the two governments reaffirmed the principle of respect for the borders existing at independence, and that the border was to be determined on the basis of colonial treaties and applicable international law by the joint border commission.

One of the major economic damage on Ethiopia side includes loss of millions of worth hundreds of dollars goods that were at the Eritrea’s Port of Asab when the war broke out. Since then Ethiopia is also forced to start using the Djibouti Port. 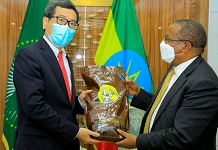