The Federal Chancellor of Austria, Sebastian Kurz, arrives Addis Ababa, Ethiopia on Thursday for offcial visit. He is received by Prime Minister at the PM Office.

The visit by Sebastian Kurz follows the meeting between the two heads of state on the margins of the G20 Investment Summit held in Germany in October of this year.

During bilateral talks with the Austrian delegation, Prime Minister Abiy Ahmed highlighted the strong historical relationship that Ethiopia enjoys with Austria and noted this is important for the current reforms that Ethiopia is undergoing.

He acknowledged the visit as an opportunity to focus on investments, trade and technology exchange.

The Prime Minister shared with Chancellor Kurz and his delegation that one of the key elements of the reforms to bring democracy in Ethiopia is changing the narrative and dynamics with competitive political parties, which for the longest time have been referred to as ‘opposition’ parties.

Noting that at this moment all political parties that have been in exile have returned to Ethiopia, the Prime Minister emphasized that part of the reforms the Government is spearheading will guarantee democratic elections, bring stability to the country and make Ethiopia a role model in Africa.

Prime Minister Abiy Ahmed also shared that strengthening the bi-lateral relations with Austria is critical and this will be facilitated through the potential opening of an Ethiopian Embassy in Vienna.

Chancellor Kurz on his part commended the changes taking place in Ethiopia and expressed his admiration for the processes of democratization as well as economic development that are unfolding through the reforms.

Highlighting that Ethiopia will be a role model for other African countries, he also expressed the interest to strengthen the cooperation with Ethiopia, and to also augment European Union – Africa relations from development cooperation to economic cooperation rooted in innovation. 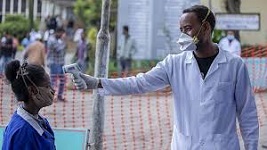