NEPAD-IPPF proposes that each country should have a window linked to the centralized hub as part of an overall objective to unlock bankable investment opportunities in Africa.

“It would be both a ‘project hub’ and a ‘help desk’ – a centralized IT platform for bankable projects which potential investors can access. Such a hub could be housed by the AfDB to ensure credibility and confidence by both project owners (governments) and potential investors,” Shem Simuyemba, Coordinator for NEPAD-IPPF said at an assessment and programming session to develop a pipeline of bankable infrastructure projects for three years, 2018-2020.

The assessment and programming session was held at the AfDB Headquarters in Abidjan, Cote d’Ivoire on 20July 2017. Simuyemba explained that the  ‘one-stop-shop’ initiative would not just be a listing of projects, but a differentiation of the ‘financial-readiness’ of the projects in terms of all the key returns that investors look for: assurance of transparent procurement practices, tenure, risk, returns, availability of co-financing, depth of local capital markets, among others.

“The important point to remember is that projects need to be bankable from the point of view of the person who will provide the risk capital to make the project happen. While bankability is about figures, it is also about risk and reality and these factors all go together in making an investment decision,” Simuyemba said.

He stressed the need for bankable investment opportunities in Africa to be unlocked to attract regional and international investors. Unlike other regions such as North America, Europe, Asia and Latin America which have strong private sector project developers and sponsors,  the emergence of  an indigenous class of trans-continental investors such as Dangote was just the beginning for Africa.

This is attributable to a number of factors, among which is a history of state monopoly companies which crowded out the private sector and stifled its growth; heavily controlled and regulated sectors particularly in infrastructure – which did not have the necessary enabling environment and incentives for private sector participation; as well as weak capital markets.

Unlocking investment opportunities in Africa requires a number of measures to be undertaken as a matter of policy priority.
Simuyemba outlined three other measures to be taken to achieve this.

The first is the liberalization of sectors which are still dominated by government. He gave examples of the information, communications and technology (ICT) sector whose liberalization a few decades ago opened massive investment opportunities for the private sector.
He observed how African countries which have recently opened up their energy-power sectors have witnessed major investments by independent power producers (IPP) and even smaller players in off-grid green energy investments.

“The transport sector for both road freight and passengers is now vibrant because it is predominantly private sector driven. However, the same cannot be said about railways where governments still need to provide clear guidelines on an ‘open access rules’ for railway operations. Equally, despite the Yamoussoukro Decision (of an open African air transport market), investments in airport infrastructure, safety and industry have remained relatively limited. The key to unlocking investments in these sectors is clear market rules.”

The second is the need to scale-up capacity for project preparation and development as this is the only means to assess, package and structure the projects in such a way that there is a ‘rolling pipeline’ of bankable projects.

Speaking at a NEPAD-IPPF Project Financing Roundtable facilitated by the international law firm – Baker and Mckenzie – on 2 May 2017, investors lamented the absence of bankable-investment-ready projects tailored to the needs of public financiers, concessionaires (public-private partnerships) and the private sector.

Investors had noted that the appetite to invest depended on risk considerations which were very different depending on whether the investor was a Development Finance Institution (DFI), a project developer or a private investor.

“To achieve this requires considerable scaling-up of capacities and resources for project preparation and development. This is a space largely neglected in terms of resources even though it has been demonstrated that US$1 committed to project preparation and development unlocks between US$80-100 in investment financing. Thus, a project with US$10 million in preparation costs can unlock between US$800 million to US$1 billion in financing depending on the sector and project location,”  Simuyemba explained.
He also spoke on the importance of regional markets which he said need to be created through deliberate policy reforms, enabling environment, incentives and strengthened partnerships.

Most African countries are too small to be attractive markets for major infrastructure investments or even major industries.  While there was a lot of debate related to the lack of political will in the past, African countries have more recently shown a new resolve by undertaking bold reforms and also reaching consensus on major African Union (AU) continental initiatives such as the Programme for Infrastructure Development in Africa (PIDA), the Continental Free Trade Area (CFTA) and the AfDB’s High 5’s.

For instance, major investments in power generation and transmission lines currently going on in Africa will achieve a greater economic impact if they are accompanied by policies to create a vibrant continental energy market whose elements are already in place through the regional power pools.

To spur industrialization in Africa, there is need to create inter-connected trade and transport corridors to enhance efficiency and reduce transaction costs so as to make African industries, and therefore, make  imports and exports competitive within  African, intra-regional markets and    international-global markets.

While Africa has huge potential particularly in the infrastructure sector, bankable investment opportunities in Africa must be unlocked. There has been much talk about Sovereign Wealth Funds, Pension and Insurance Funds, and other institutional investors investing in infrastructure in Africa, but this has not happened to the scale envisaged.

These institutional investors have not been guided towards the right types of projects tailored to their specific profiles and financing needs and given the massive resources in these institutions. This gap needs to be bridged as a matter of urgency to unlock these funds for the much needed infrastructure investments on the Continent.

The NEPAD Infrastructure Project Preparation Facility (NEPAD-IPPF) is a multi-donor Special Fund hosted by the AfDB. It supports African countries to prepare regional infrastructure projects in energy, transport, ICT and transboundary water to make them bankable for investment.

Established in 2005, the Facility supports African countries to prepare bankable regional and cross-border projects across the infrastructure sectors. It is funded by a number of Donor Partners, namely, Canada, Germany, the UK, Spain, Denmark and Norway. 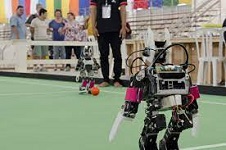 Is South Africa to excel at coding, robotics?

The building blocks of a new mobile revolution