The Government of Ethiopia said it has seized two containers of weapons including over 18,000 Turkish made Pistols, imported illegally via Djibouti Port by arms’ traffickers.

The weapons are imported to Ethiopia by an international weapons’ trafficking group, according to the Ethiopian National Intelligence and Security Service (NISS). The weapons in the two containers are shipped from The Port of Mersin of Turkey, according to the state news agency – Ethiopian Press Agency report, which quoted NISS.

The report stated that the two containers were hidden in Port of Djibouti for five months before finally smuggled into Ethiopia and seized by the government of Ethiopia. The seized weapons include over 18,000 Turkish made pistols. It is also stated that within the containers the police has also found 229 cartons of different electronic equipment used as a cover by the smugglers to import the weapons. Sudan

Some 24 suspects who were prepared to distribute the illegal weapons across the country are arrested by the police, according to the report. In addition international arms traffickers from seven countries including two from Sudan are arrested in collaboration with the Sudanese intelligence agency. the report also stated that NISS has collaborated with the U.S, Djibouti, Libya and Turkey intelligence offices to seize the pistols.

Police and customs reports show that illegal arms circulation has been increasing over the past few years in Ethiopia. 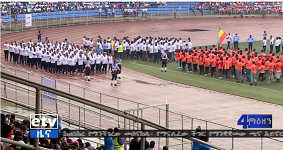