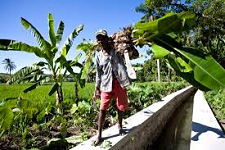 With potato production in East Africa under increasing threat from the invasive and highly destructive potato cyst nematode (PCN) pest, an organic technology developed from banana plant waste material may well be the ultimate rescue.

Known as ‘wrap and plant’, the solution involves enclosing potato seed before planting, in a thick absorbent paper that is made from the fibre of banana plants. This strategy provides a protective barrier for the plants against damage by PCN.

These findings of research led by the International Centre of Insect Physiology and Ecology (icipe), International Institute of Tropical Agriculture (IITA) and North Carolina State University, USA, working with various partners, have been published recently in Nature Sustainability

“Initially, we aimed to understand whether the ‘wrap and plant’ technology can help to improve the delivery and effectiveness of nematicides, the chemical agents that are used to control parasitic worms that damage crops, such as nematodes,” notes Juliet Ochola (Kenya), who was involved in the research as part of her MSc studies, completed in 2021, co-supervised by icipe and IITA while registered at Kenyatta University, Kenya.

She adds: “We established that when loaded with ultra-low dosages of nematicides, the banana paper enables the chemicals to be released in a slow and sustained manner and in very low but effective concentrations. The paper also facilitates the nematicides to be conveyed specifically to the root zone of the potato plants; the infection site of the nematodes, thus preventing contamination to non-target areas and organisms.”

As Prof. Baldwyn Torto, Head, Behavioural and Chemical Ecology Unit, icipe, explains, the most significant discovery of this study was that, even without the nematicides, the ‘wrap and plant’ technology protects potato from PCN damage.

“We established that the banana-fibre has unique sponge-like properties. Thus, through a process known scientifically as ‘hydrogen bonding’, the ‘wrap and plant’ paper is able to soak and physically bind the critical chemical signals released by potato crops that allow the PCN to hatch, find and infect the plant’s roots. We confirmed this to be the case, as we recovered these chemicals from the paper,” he states.

The banana-fibre characteristics make the ‘wrap and plant’ paper dense, rigid and sturdy, such that it remains intact in the soil while also allowing the plant’s roots to germinate and thrive. Although the paper is durable, it is also biodegradable, and it eventually decomposes.

First detected in Kenya in 2015, the PCN pest has now widely spread across major potato growing regions in the country, and in Rwanda and Uganda.

“The current study demonstrates that the ‘wrap and plant’ paper, whether containing nematicides or not, and depending on the practices of individual farmers, can increase potato yield by up to five times. This is by preventing the damage by PCNs as well as other nematode species.”

The ‘wrap and plant’ technology is a promising boost for food and nutrition security as well as household incomes, as it will help to safeguard production of potato, East Africa’s second most important staple crop. I

t also contributes to the vision of a circular economy by transforming banana-fibre, often regarded as an agricultural waste and a nuisance for farmers, into a raw material for a pest control innovation. This could create opportunities for entrepreneurs and farmers.

Besides reducing overuse or misuse of chemical pesticides, the ‘wrap and plant’ technology will also support environmental protection by assisting to curtail the growing trend where farmers are compelled to clear forests in an unsustainable manner to create productive fields that are free of PCNs and other pests. Overall, this breakthrough in PCN control demonstrates an environmentally-friendly way to counter disruptions in sustainable food systems.