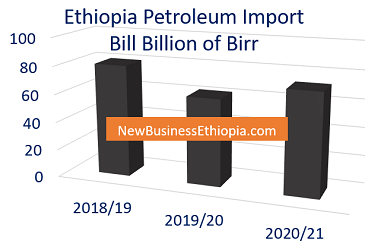 Compared to the previous year, the annual petroleum import bill of the Government of Ethiopia has increased by close to 19 percent during the last budget year 2020/21 reaching all-time high 72.60 billion Birr.

The previous budget year (2019/20) ended July 7, 2020; Ethiopia has spent a total of 62.05 billion Birr to purchase close to 3.87 billion metric tons of petroleum. While the east African country purchased about 3.72 billion cubic meters of petroleum for 72.60 billion Birr, according to the latest annual report of the National Bank of Ethiopia, which complied the data of the state agency in charge of importing petroleum – Ethiopian Petroleum and Supply Enterprise (EPSE).

In 2020/21 the total volume of imported petroleum, however, shrank by 3.8 percent “owing to the decline in import volume of jet fuel (30.7 percent) and gas oil (1.3 percent) which offset the increase in import of regular gasoline (13 percent) and fuel oil (8.9 percent)”.

On the other hand, the total value of petroleum imports increased 17.0 percent over last year mainly due to higher international oil prices which lead the higher import values of fuel oil (53.8 percent) regular gasoline (53.3 percent) and gas oil (18.6 percent) in contrast with the decline in import value of jet fuel (23.6 percent), according to NBE report. 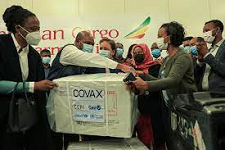