Ethiopian government has invested $71 million for the construction of DIP, located in Amhara Region around 170 kilometers from the Capital Addis Ababa. DIP has eight sheds built on 44,000 square meters of land. The Park has a total of 75 hectares, which will soon expand to 1,000 hectares having textiles, and agro-processing sections, according to Gedu Andargachew, head of Amhara Region of Ethiopia.

The companies that will initially start production within DIP will create jobs for 13,000 employees in textiles industry. Gradually the Park is expected to operate in two and three shifts doubling and tripling the number of employees.

A total of 111 households mainly smallholder farmers are voluntarily displaced for the construction of DIP after getting compensation, according to Mr. Gedu.

Recalling that Ethiopia is celebrating the 123rd anniversary of the victory of Ethiopians over Italian invasion, Prime Minister Abiy said: “…like our grandparents have paid heavy price for the independence of Ethiopia, today we are willing to make any sacrifices to assure unity and equality of Ethiopia.”

President Uhuru on his part stressed the need for unity and collaboration to lift the people of East Africa out of poverty and lead to prosperity.

“I was honoured to join Ethiopians on the momentous occasion when they celebrate the historic defeat of colonial forces by their brave warriors led by Emperor Menelik II in 1896 near the town of Adwa in the Tigray Region,” President Uhuru twitted.

Currently there are several industrial parks are operational in Ethiopia creating jobs for over 64,000 people, according to the latest information obtained from Ethiopian Investment Commission, which indicated that several other are under-construction. 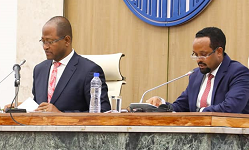