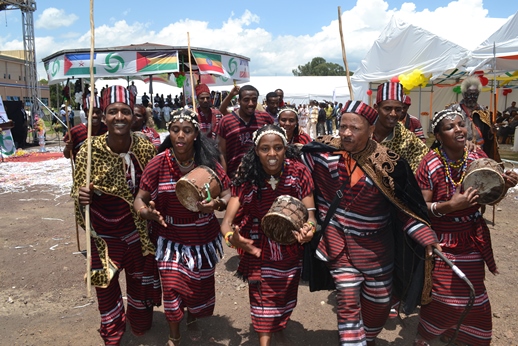 Hawassa, one of the fastest growing cities of Ethiopia with dozens of indegineous tribes, host an international tourism expo displaying cultural shows of the 56 tribes found in the Southern Region.

Opened on Thursday by the First lady of Ethiopia, Roman Tesfaye, the expo attracted different regions of Ethiopia and embassies such as Iran, Kenya, among others, which are displaying their cultural products and services.

Over 120 companies from 40 countries engaged in various sectors such as hospitality, tourism are taking part in the expo Hawassa, is hosting for the first time. Hawassa, the capital of Southern region of Ethiopia, is endowed with many unique and existing places to visit with dozens of indigenous ethno-linguistic groups.

The 1st Hawassa International Trade and Tourism Expo, is organized by INNOVASION Events with the objectives of bringing together major players in the tourism industry and create linkages to accelerate the development of the travel and tourism industry.

At the opening the different indigenous tribes of in the Southern region of Ethiopia have shown their performances to the guests attending the expo. Evangadi – celebration festival of the Hammer people – is one of the major hallmark touristic events of the lower Omo valley people.

The region is also home for several cultural ceremonies, which take place during the transformation of power from generation to generation by Dasenech, Gyangatom, Dime and many more tribes found in South Omo that borders with Kenya.