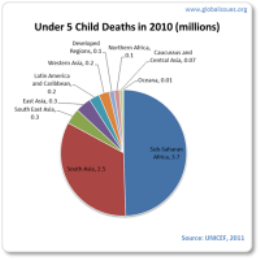 The European Union (EU) has given €3 million in humanitarian funds to support UNICEF’s emergency interventions in Ethiopia, which is estimated to improve 130,000 children’s nutrition.

The new grant will provide life-saving nutrition treatment for severely malnourished children living in drought-affected areas of the country. In Ethiopia, below-average rainfall has worsened the situation in Somali, Afar, and parts of Oromia and Southern Nations, Nationalities, and People’s (SNNP) regions, already severely affected by protracted drought. Access to water, sanitation and health services in these areas is critically low, according to UNICEF’s press statement.

In addition, livestock deaths have further reduced communities’ capacity to cope, resulting in food and nutrition insecurity. An estimated 303,000 children under the age of five are at risk of severe acute malnutrition (SAM) in 2017.

“We are grateful for EU’s continuous and generous assistance for life-saving interventions addressing malnutrition at this critical time,” said Ms Gillian Mellsop, UNICEF Representative to Ethiopia.

“We believe that the funding will significantly improve the health condition of children affected by the current drought and reduce the long term impact of malnutrition including life-long cognitive impairments.”

The EU humanitarian funding will support UNICEF to reduce child mortality and morbidity associated with SAM. In order to reach vulnerable children in remote areas, UNICEF will support the Government to expand existing healthcare services and provide treatment supplies – including ready-to-use-therapeutic food (RUTF), therapeutic milk, and medicines. The intervention will also aim at mobilizing communities’ awareness on preventing malnutrition.

“Infants and young children are extremely vulnerable to a combination of malnutrition and diseases. To avoid unnecessary deaths and suffering, we need to respond to the needs of these children in time with appropriate treatment and care.”

The concerted efforts of UNICEF with the EU, the Government of Ethiopia and other partners, will relieve the suffering of children while continuing to build long term resilience and strengthening the Government’s capacity to respond to future nutrition emergencies.

The European Commission’s Humanitarian Aid and Civil Protection department (ECHO) funds relief operations for victims of natural disasters and conflicts outside the European Union. Aid is channeled impartially, straight to victims, regardless of their race, ethnic group, religion, gender, age, nationality or political affiliation. The European Commission is among UNICEF’s largest humanitarian donors.

UNICEF promotes the rights and wellbeing of every child, in everything we do. Together with our partners, we work in 190 countries and territories to translate that commitment into practical action, focusing special effort on reaching the most vulnerable and excluded children, to the benefit of all children, everywhere.